Ruth Rendell’s decision to write as Barbara Vine in parallel with her other titles gave her the scope to write a completely different sort of personality based thriller. Like her crime novels, each of her Barbara Vine titles was very compelling and wonderfully original  and I remember reading them in tense admiration as they were published – usually one a year. She was a very prolific writer.

So where to start re-reading? I looked at the list of titles and decided that I’d return to A Dark-Adapted Eye (1986) which was Barbara Vine’s debut. And of course I wasn’t disappointed. I was hooked from page one as if I’d never read it before although I remembered the end so I was acutely aware of some of the detail in a way I don’t think I was first time round. In that sense it reminds me faintly of Daphne du Maurier’s Rebecca, another novel which matures with each re-reading.

Vera Hillyard was hanged for murder. We know this from page one. The question is why? Whom did she murder? Her narrator niece, Faith, is looking back many years later and reflecting as she visits a man named Jamie in Italy. Gradually, tense drip by drip, but almost in passing, we learn who all the members of this family are and how they are related to each other. Some of them are quite conventional which provides an immaculately crafted contrast to Vine’s greatest strength. She is utterly brilliant (as is her alter-ago Ruth Rendell) at creating very strange but totally believable people. Vera, who is married to an absent military man is inscrutable, loves to sew and create beautiful things, has strange snobbish tics about, for example, eating habits, is humourless and puts others down constantly. She is also – we gradually realise, lonely and vulnerable – and given a terrible time by her very unpleasant son Frances whose character is another example of Vine’s gifts.  But it’s a very long time before we see how she could possibly have murdered anyone. Vine keeps you whipping the pages over to the very last.

Ruth Rendell died 22 years ago in 1999. She was a reliable best seller for decades and it’s odd that we don’t hear much about her now. A Dark-Adapted Eye is as fresh as the day it was written. If you’re a Rendell/Vine virgin you’re in for a treat.

I admired Rendell for another reason too. She married the same man (Don Rendell) twice. Divorced in 1975, after 25 years of marriage. they remarried in 1977 and remained together until her death. I think there’s something rather lovely about realising (presumably) that you’ve made a massive mistake and putting it right like that. 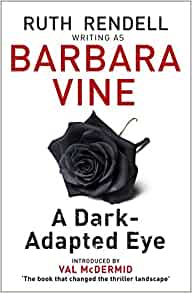 Next week on Susan’s Bookshelves: The Courage Game by Jeni Whitaker