Anniversaries are strange old things. It makes no rational sense to get maudlin about them. Each day is just another date on the calendar. And yet. As one wise friend said to me, last week, they punctuate our lives.

In recent months, I have managed to get through our wedding anniversary, my birthday. Nick’s birthday and the anniversary of the day we became an item. Despite Covid and all its attendant prohibtions I have coped by keeping busy and and spending plenty of time with family.

Last Thursday marked the anniversary of Nick’s death in Lewisham Hospital at 9pm on 20 August 2019. I didn’t want to be alone at home in case I fell apart so I went to Cambridge overnight and had dinner with my elder son and his family. We toasted the person who was missing but otherwise simply enjoyed chatting and catching up with news. Just another day – and provided I’ve got plenty to do and think about, I’m fine. As Lord Hailsham once remarked long after the death of his wife in a riding accident: “It’s like losing a leg. Life will never be the same as when you had both legs but somehow you learn to get about with only one”. I’m blessed with plenty of  good crutches, loads of will power and lots of things I want to do – get back to a normal pattern of work, for example, once we’ve stopped panicking about this wretched virus.

The Alzheimer’s Diaries: a love story is 36% funded. It occurs to me that if every one of the lovely, generous 157 people who have so far supported the project were to persuade just two people to support it we’d be home and dry in an instant.  And that would be a fantastic way of marking the first anniversary of life without Nick. 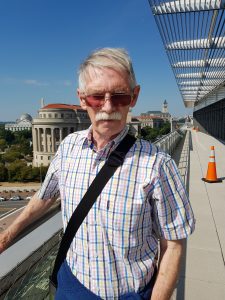