It is now 20 days – almost three weeks –  since Nick died of Alzheimer’s on 20 August. And I find myself in the strange terra incognita of early widowhood. A few thoughts  about grief and grieving before the funeral on Thursday after which I will write a final blog.

It’s a time of discovery in several ways. First, Louis Armstrong was right. It is indeed a wonderful world. Never mind scumbag politicians, silly strikes or even terrorists. The vast majority of people are astonishingly kind, caring, thoughtful and good. I have had over forty cards and letters and literally hundreds of emails and social networking messages. I have never felt more warmly supported.

On the other hand dealing with others isn’t always easy because this is such a Big Thing. If I meet a casual acquaintance when I’m out working who says “How are you?” and obviously doesn’t know, it’s hard to know how to answer because if I tell the blunt truth she or he is immediately very embarrassed. But if I say “Fine, thanks” and move on, the next day they will hear what has happened from someone else and think it was very odd that I didn’t mention it. So I usually end up with something like: “OK – ish but not the best of summers. Sorry, you’ll wish you hadn’t asked but the truth is …”

Then I have to get accustomed to living alone – in the house we moved to three years ago with high hopes of a long and happy time here together. Most of the time it’s all right. I have, effectively, lived solo since Nick was admitted to hospital on 03 July apart from odd nights that sons have stayed and two weeks when my regular visitor (an old schoolfriend who lives abroad) was here for her summer residence. So I’ve had time to get – sort of – used to it. I have the radio on almost all the time (Nick hated that unless he was actually sitting, listening to it) for company and the Cat is earning his keep. Darker evenings may be harder. We’ll see.

There is always plenty to do after a death and Lucas and Felix and I are working through it all. Between us we’ve now done all the important notifying and we’ve hired a local solicitor to help with probate which, for a couple of boring legal reasons, has not turned out to be quite as straightforward as it should have been. We’ve dealt with Nick’s possessions too and restored the house to normal.

I also have a busy work diary – I reviewed five shows last week. At the point when Nick died I was just one week off two big deadlines which I’d been trying not to think about. In the event I got that work done and submitted on time so that was satisfying, a relief and oddly therapeutic because it felt like Real Life of which I had had very little for many weeks. Work will be what saves me, I think.

And of course there are things I don’t miss at all: worrying every single moment I’m not in the house, dealing with incontinence and disability and, latterly, spending hours every day, anxious and tense, at Lewisham Hospital and so on and on.

I can now eat what and when I like too. I’m so revoltingly practical and sensible that I now have a freezer full of home cooked single portions of all my favourite dishes – some of which, such as mushroom stroganoff and Lebanese moussaka, Nick wasn’t fond of so, in practice, I used not to have them very often. Now I can.

Inevitably there’s plenty I do miss, though: the warmth of his hand, his smile if he heard an especially lovely bit of music, the sound of his footstep around the house and a lots, lots more. And, once upon a time, he did all my paper work, managed the dishwasher and put the bins out. Fifty years is a long time to share your life with someone.

I struggle a bit with what I’m actually feeling and what I’m meant to feel at this moment. I suppose everyone’s different. I knew almost from the moment Nick was diagnosed in 2017 that this disease was going to consume him quickly. And if I have a strength it’s being able to look the truth straight in the eye – and then plan on the basis of reality, however awful it is. I have therefore thought a great deal about how things would be, and what I would do, after his death. I’ve been “acquainted with grief” as Messiah puts it for a long time. And I think that preparation is helping now. I also know – unequivocally and with total certainty – that, hideously cruel as it was and much as I loved him, Nick had lost all quality of life and his death was a relief for him as well as for us.

None of that, of course, means that I’m not brittle and, inevitably, it takes very little to reduce me to tears – but usually not for long. Sometimes I get involved in work or something else and don’t think about any of it for a whole half hour. Then I remember and press it like a sore spot to see if it still hurts. It does. Obviously.

I also have very painful back problems which started about a month before Nick died and have worsened since. Of course it can’t be coincidence. My body is protesting about what it, and I, have been through in recent months. In some ways this is, at present, causing me more “grief” than anything else but I have sought expert advice and am doing all the right things.

I’ve been told, by several people, that it’s common to hit rock bottom at about three months. That takes me to the end of November – the beginning of the panto season when I am usually pretty busy. Maybe this year will be different. Don’t know. This new life of mine is like being in a completely foreign country where I don’t understand the language or what’s going on. Best just to take each day as it comes and “let the grief in” (as a wise friend advised last week) when I need to, I suppose.

FUNERAL ANNOUNCEMENT: Nick’s funeral will be held at 11.00am at St George’s Church, Vancouver Road, SE23 2AG on Thursday 12 September and afterwards at the Fellowship and Star, Randlesdown Road, Bellingham SE6 3BT for a light buffet lunch. Absolutely anyone who knows us is warmly welcome but it would help for catering purposes if you could let me know if you plan to join us. Please don’t wear black. No flowers please (apart from mine and Lucas’s and Felix’s) but we’d love it if you could donate to the memorial fund in aid of Ash Ward at Lewisham Hospital where Nick spent his final weeks. You can do it via Go Fund Me https://www.gofundme.com/f/nicholas-elkin-memorial-fund?utm_source=customer&utm_medium=copy_link&utm_campaign=p_cp+share-sheet  or if you’d rather contact me privately I’ll give you my sister’s details for cheques and BACS – she’s coordinating the appeal. 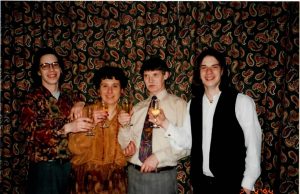 Our Silver Wedding in 1994. Not quite sure why we all felt the need to dress to match the curtains …