Toby Olié’s puppetry is the star of this show. For life sized puppets to live, they must never be still. Designed and directed by Olié, these jointed creations are magnificently controlled by a team of fourteen skilled puppeteers. They move continuously in a convincingly equine, canine, feline, bovine – or whatever – way. And the birds are a delight. Judged for that alone, this would be a four or even five star review.

Unfortunately there’s more to a show than its puppetry, even when it’s a fable about animals and almost all the main characters are “beasts of England” as their revolutionary hymn puts it.

Robert Icke’s adaptation (he also directs) tells the familiar story fairly straightforwardly as the animals take over the farm, evict the farmer and set up a communist society based on total equality. Of course it doesn’t work. The pigs assume the lead, gradually begin to exploit the other animals and are eventually indistinguishable from human beings. George Orwell’s  famous, spare and impeccably observed 1943 novel is, of course, a response to developments in Soviet Russia from the revolution in 1917 to the Second World War.

Theatrically I found the disembodied voices unsatisfactory. Although the animals are voiced by fine actors such as Juliet Stephenson, Amaka Okafor, Robert Glenister and David Rintoul, it isn’t always clear which animal is speaking so your eyes are constantly searching on stage. The visual and aural elements don’t quite integrate.

The music is a distraction too. Someone (sound and music designer Tom Gibbons?) has evidently decided to use “classical” music for the big action scenes such as the Battle of the Cowshed. I suppose it’s meant to be crowd pleasingly filmic. And the many young people in the audience at the performance I saw were clearly happy. But for someone who recognises most of it, it’s very off putting suddenly to be bombarded with  a burst of Elgar’s Enigma Variations, The Verdi Requiem and part of a Mahler symphony among many other things. It feels contrived and each time it happened it set me off on a train of thought trying to work out why each piece had been used when it was – when I should have been concentrating on the action.

This is the third adaptation of Animal Farm I’ve seen in a year – all by different people. This is partly because Orwell’s writing came out of copyright in 2020 (he died in 1950) so there’s scope for a free for all.

But there’s another reason, much closer to home. I doubt that Orwell foresaw in the 1940s just how topical this tale would be nearly 80 years later. It’s about power, dictatorship, propaganda, authoritarian lies and ruthless selfishness. I doubt that I was the only Brit, less trusting than Clover, who muttered a few weeks ago  “And all the time, the pigs were boozing in the farmhouse”.

Nothing in this show overtly draws attention to 2020/22 parallels but they’re pretty obvious. Sur-titles flash up the name, age and breed of each animal who dies and that’s moving whether we’re thinking of Covid victims or a different sort of war. 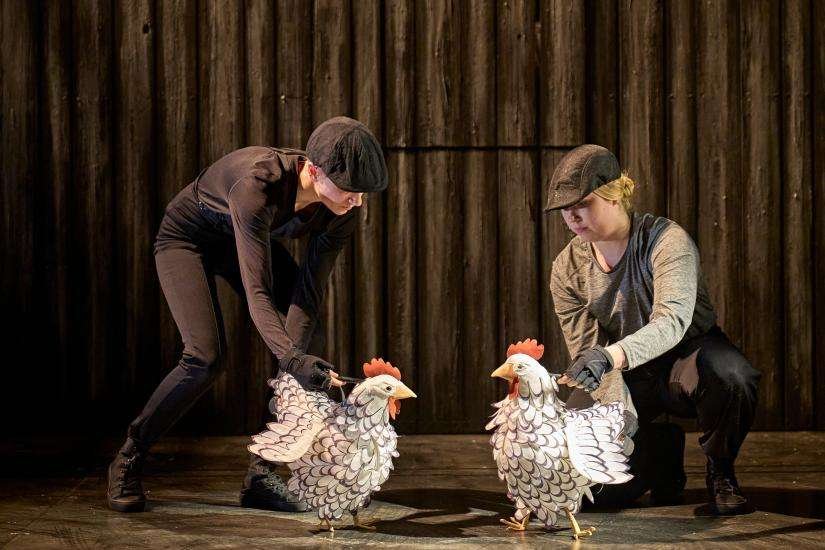 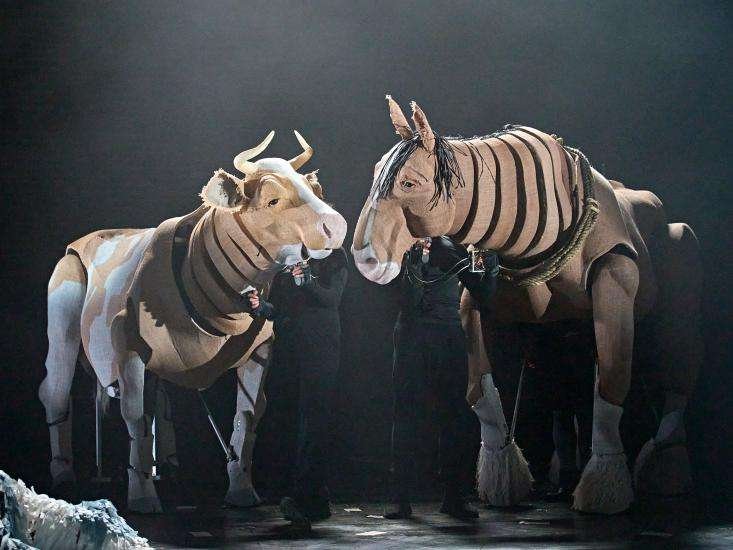 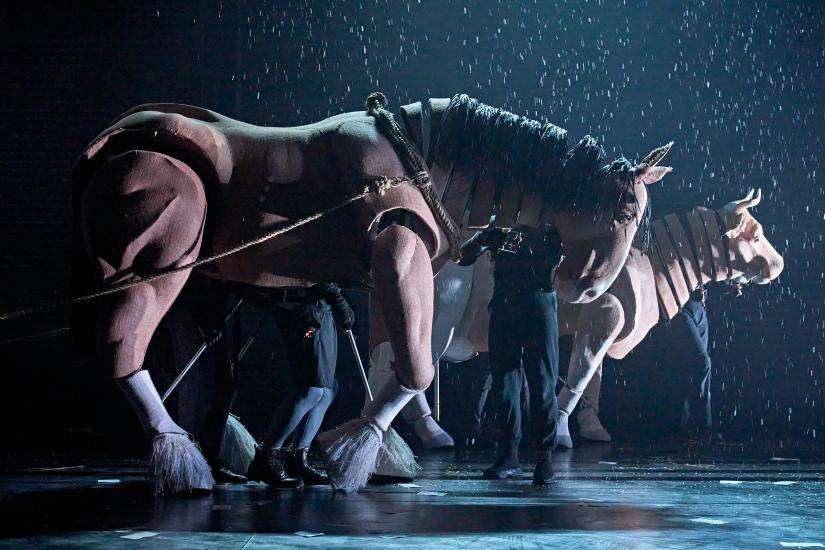