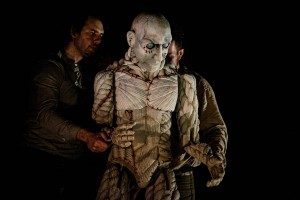 It’s gone ubiquitously mainstream. And don’t anyone say it’s “the Warhorse effect”. The passion for puppetry across the industry has been growing rapidly for at least twenty years. It is now almost everywhere. And, given what an interesting theatrical phenomenon it is, I think that’s a really welcome development.

I’ve just seen Blackeyed Theatre’s new production of Frankenstein and what a show it turns out to be. So just how do you depict a monster convincingly? Yvonne Stone, puppeteer and puppet maker who used to work for National Theatre on Warhorse, has come up with a solution. Her monster is a (slightly) larger-than-life creation of ropes which suggest muscular strength. It’s operated by three actors in a five-hander piece. They make it breathe, speak, sigh, pant and much more. See this and you’ll be spoiled for any other stage adaptation of Mary Shelley’s novel because it works a treat. It opened at South Hill Park’s Wilde Theatre where Blackeyed is based but there’s a big national tour stretching well into 2017 so there are plenty of chances to catch it.

The point about puppetry, of course, is that it takes the audience on an imaginative journey which has little to do with realism. When you see Avenue Q or take your kids to see Pepper Pig you can all see the actors who manage and voice the puppets. It’s a magical, inclusive journey of make believe. At opening of The Lion King we all know that actors are holding items up and walking with them. But it doesn’t matter. It’s an elephant and that’s the end of it. The elephant in this summer’s Running Wild at Open Air Theatre Regents Park had as much “elephantness” as a whole herd of real ones too.

And anything can be anything. A rolled up cloth becomes a baby. A paper bag can be a face. I once saw a wacky production of A Midsummer Night’s Dream in which Puck was a few tools and an oil can puppeted by actors. And I loved a fringe show in which several women played violins and then turned them into babies with puppetry skill and fine acting. Puppets can do things which actors can’t – such as fly or explode too.

So why aren’t the drama schools teaching puppetry more proactively? At its most refined puppetry is a complex, highly skilled and takes years to learn. Yes, there’s a fine course at Central and The London School of Puppetry offers training. Little Angel Theatre, especially since acquiring its nearby satellite studios, offers a lot of actor CPD as well as starter courses. Of course there are other options too. On the whole though, if drama schools are teaching puppetry at all it’s in the form of short modules or optional courses as if it were a tiny, marginal specialist area. Surely they’re missing a trick and failing to address current industry needs? Puppetry is now so mainstream that every actor needs to be able to do it and to do it well. And the industry needs specialists who have studied puppetry in depth through discrete full-time two or three year courses too.