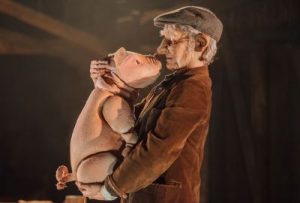 Wiggling woolly bottoms, energetic folksy music, much baa-ing and a fabulously scary Lion King-style larger-than-life dog puppet spirits us away to Dick King-Smith’s retro country farm. There, a piglet, won in a competition and mothered by the farm’s resident sheepdog, turns out to have an unlikely talent for sheep herding. It’s a story well known to, and much loved by, at least two generations and David Wood’s play version, which dates from 1997 has been revived many times and does it real justice.

Polka present it as an eight hander with lots of imaginative choreography and tight ensemble work under the imaginative direction of Michael Fentiman. In the past I’ve seen Babe played by a child or young actor dressed as a pig. Here he’s an engaging piglet puppet managed and voiced by an ensemble member who alternates between this and evocative violin playing – often dancing at the same time.

Fine puppetry is one of this show’s (many) great strengths. Directed by Mathew Forbes, puppets include a nice group of stripey brown ducks, and extra sheep as well as Babe himself and that sheep-worrying dog who kills an elderly sheep while the others huddle in impotent fear. This is real life in the country. Although there’s a lot of charm it is also a truthful piece. Babe, for example, is destined to be fattened for bacon until his unusual qualities emerge.

It’s a noticeably well-paced show. At times it pulses with energy. Other moments are quiet. The first half ends on a powerful cliff hanger and the scenes leading to the sheepdog trials – which of course Babe wins against all odds and expectation – give a satisfying structure to the second half. The length at 1 hour 45 minutes (with an interval) is spot on for the target audience too and that’s surprisingly unusual. Many shows are too long.

I was accompanied by a seven-year-old and a four-year-old. By the end the four-year-old was literally hopping up and down with gleeful excitement. Her brother, a fairly seasoned theatregoer for his age, deemed it “the best show I’ve seen.” I don’t think the producers could ask for more.