Ben Irish: my opening night as a soprano lead 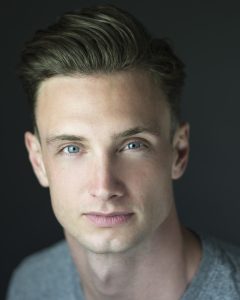 I’m always nervous when I’m about to make an entrance. Then came Cambridge and the opening night of the tour on 20 April in the Arts Theatre.  I stood in the wings. It’s Sasha Reagan’s All Male HMS Pinafore and I play Josephine, the lead soprano.  The level of my nervousness that night was off the Richter scale and it was a real struggle to keep it down. In the event I missed a note and was very cross with myself. It was an easy note and I’d never missed it before. I was mortified – although comforted in the wings by reassuring mates – and immediately texted the director to apologise.

Nothing in my musical theatre training at Arts Ed had prepared me for this role. I’m a natural baritone and they say it’s easier for us to sustain a falsetto than it is for tenors but nonetheless it is very hard work and you have to exercise the muscles of the voice, rest it and gradually build stamina. I suspect that the tension of the opening night coming at the end of three weeks of rehearsals and a week of tech meant that my voice and I were just tired. I was vocally shattered. In fact it is actually much easier to do eight performances a week than to rehearse because you have time to rest during the day.

It’s a great company to work in because All Male HMS Pinafore is conceived as an ensemble piece and everybody supports everyone else. We’re all of an age too – actually ranging from 19 to 35 in years – but all at about the same level of professional maturity. It’s one of the nicest casts I have ever worked in. I’m 27, and have played in all male shows before, but only as ensemble or cover and without the pressure of getting onto the stage and singing those leading solos.

Of course I’m still very nervous and I don’t think it will go away but it’s better than it was on that first night and, of course, nerves settle as each performance progresses.  And in the scheme of things that missed note didn’t matter much. The audience chuckled supportively and no one held it against me.