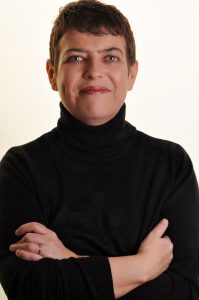 Annemarie Lewis Thomas is composer, musical director and founder principal of Musical Theatre Academy. MTA has just won the Stage School of the Year (2017) award for the second time. She chats to Susan Elkin

It was a walk in the park with her partner, Angie Peake and their dogs which propelled Annemarie Lewis Thomas into founding the remarkably successful Musical Theatre Academy (TheMTA) in 2009. “I’d been head of musical theatre in another school, had had some very unfortunate experiences including being both fired and slandered by the management” she says. “It was February 2008 and I was unhappy with everything. Then came the idea of starting an entirely ethical school of my own., ‘Do it’ said Angie. And we were off …”

I first met Annemarie early in 2009 when she invited me to sit on auditions for her inaugural group of students. She is short, fierce, funny, very Welsh and a fabulous musician. I watched her and two colleagues audition Sam Hallion and told her afterwards that I hoped they’d offered him a place. They did. He was one of her first group of 13 students. Six years after graduating Sam has played Matthew in the European tour of Jesus Christ Superstar and toured nationally (several times) as the youngest brother in Joseph and the Amazing Technicolor Dreamcoat among other things. He is one of MTA’s many success stories.

TheMTA now boasts over a hundred graduates, known as “ambassadors” all of whom had been signed up by independent agents by the time they left. 40 of them were in work on the December day I asked Annemarie for her latest statistics. Only 17% have left the performance industry and over two thirds of those still work in the theatre industry in other capacities – as agents, for example. These figures seem excellent for a profession which has notoriously high unemployment rates. But since other drama schools do not publish their statistics – one of Annemarie’s many frustrations – neither she nor I can make any useful comparisons. “We’re in touch with every single one of our ambassadors” says Annemarie who suspects that other drama schools are not. Three of TheMTA’s 2015 ambassadors had already earned enough to clear their student debts within a year of graduation.

Today, I’m talking to Annemarie in her small but neat and businesslike office at the Bernie Grant Arts Centre in Tottenham. The MTA was initially based at the Drill Hall in Chenies Street (now RADA studios) and then in studios behind a shop front in Holloway Road. The recent move to BGAC has given TheMTA much more space and a fine onsite theatre in which to stage most of its shows – at least one a term because Annemarie doesn’t believe in two years of classes before students are allowed to perform to the public, which is the usual pattern in three-year drama school courses.

Born in Swansea, the youngest of three children and the only girl, Annemarie was the child of a steel worker and a school cook. “They weren’t musical at all but there was a piano in the sitting room and my dad could play three chords in C major by ear very badly. So I started playing it too and then he got me lessons because he wanted me to be better than him.” Meanwhile – she was mesmerised by the Gilbert and Sullivan productions at church where her family were devoted attenders and her mother made the tea and coffee. “My mum used to take me to theatre elsewhere when she could too. I think it was a bonding thing between the two of us as I was her only daughter.”

She excelled on the piano (and took up the trumpet on which she was “no good”), passed Grade 8 and used it to earn pocket money and to establish some sort of “cool” image at school where she might otherwise have been a bit of a misfit. “I directed shows at school and of course, because it was Wales there were Eisteddfods to take part in. I also played for a ballet school which taught me how to accompany dance, worked in working men’s clubs often just vamping and of course there were always church organs and hymns.”

Eventually, having scraped through her A levels, she went to Middlesex Polytechnic to do a degree in performing arts, specialising in music. Many years later Annemarie and Angie have adopted a son who is now three years old but she hasn’t always been gay. “I was straight when I was at university because I tended to fall in love with a person rather than a gender. Actually there haven’t been many relationships – I’m Miss Monogamy really – and Angie and I are, of course, for life.” Angie, of whom more later, is a mental health professional and deeply involved with the ethos of TheMTA.

Annemarie regards musical directing as her “real job” although she has always taught as well. After university, she taught singing, for instance, at Hertfordshire Theatre School where, in due course she became Head of Musical Theatre. She has worked at Youth Music Theatre UK since it began as well as at Broxbourne College and back at her own alma mater, now rebranded Middlesex University too. At the same time, she directed lots of fringe and “off West End” shows as well as the Christmas Musicals at Battersea Arts Centre under Jack Gunner which she regards as “very good training”.

She has also always written music and been asked to provide material such as songs as well as arrangements. “But it was usually functional and for a long time I didn’t really see myself as a proper composer.” Gradually she began to create complete, successful shows often writing the lyrics as well as the music. For example, her published works include Around the World in Eighty Days (Samuel French), Uncle Ebenezer (Oberon Books), Dangerous Daughters (Samuel French) and Great Expectations (published through YMT UK)

Her finest achievement to date, though, is TheMTA whose very apt motto is “rigorously professional”. One of its principles is that all the teaching staff are also working professionals. Annemarie audits annually everyone who works for her and parts company with anyone whose professional track record has hit the buffers. Of course she applies the same standards to herself and continues with her own professional composing and directing.

Another thing which distinguishes TheMTA is its size and the structure of the course. It’s an accelerated two year course so students have to fund their accommodation, subsistence and so on for two years rather than three. Its four terms per year are long and breaks are very short so that students get as many hours of teaching in two years as their counterparts elsewhere get in three. There is only one course. A maximum of 22 students are recruited each year and there are definitely no plans to expand.

Then there’s transparency. Annemarie was determined from the very beginning that everything should be open and ethical. “Any student can access the accounts and we have a management board which includes two ambassadors because I want to be sure we never lose sight of our founding principles” says Annemarie, adding that TheMTA is now a registered charity so that she is an employee rather than the owner.

In 2012 TheMTA’s rapid success impressed judges at The Stage so much that it was dubbed Stage School of the Year. This year – 2017 – it is shortlisted again with the final result due at the end of January. “We are utterly delighted of course” says Annemarie “not least because it’s partly in recognition of Time4Change which we’ve spearheaded.”

Angie has worked assiduously as counsellor and adviser at TheMTA from the beginning and she and Annemarie both know that mental health problems are rife in the industry – far more so than is usually acknowledged. Fear of failure and unemployment as well as having to expose yourself to audience and cameras every day can take their toll on mental wellbeing.

Time4Change (#time4change) is a charter drawn up by Angie which commits any organisation which signs up to alertness and a duty of care towards the people it works with. At the time of writing there are 115 signatories including theatres, agencies and a growing number of vocational schools. “If problems are addressed early they can often be fully dealt with” says Annemarie who is hoping that Time4Change will help to reduce the numbers of desperately anxious, ill actors and other performers in the future.

I’ve met Annemarie many times since that first encounter in 2009 and I’ve watched with pleasure as her enterprise has grown and developed. This time she’s very busy because it’s the day before the opening of TheMTA’s pantomime Robin Hood, which she herself has written. She takes me onto the (rather beautiful) set before I leave. The annual panto is, yet another strand in this ethical organisation. Local primary schools are invited on a “pay-what-you-can” basis and Robin Hood was due to play to some packed houses. So I left them all to it reflecting on what a lot you can achieve in just seven years if you’re sufficiently passionate and determined.

TheMTA’s next show is Something Old Something New, its annual revue, at Bernie Grant Arts Centre 15-18 March. www.berniegrantcentre.co.uk

TheMTA is currently auditioning for students to start the course in October 2017. www.themta.co.uk