It was a concert full of drama, mostly Russian, under Stephen Bell’s incisive baton. The drama included the conductor literally leaping up and down, and part of his score flying off his stand and landing near the leader’s feet during Night on a Bare Mountainwhich also gave us some frenetic high speed string work, perfectly controlled, slightly exaggerated, general pauses (one of his specialities), perky woodwind interjections, syncopated percussion and mesmerisingly lyrical playing after the tubular bell at the end.

This enticing old friend of a piece was preceded, in an usually structured programme, by something much less familiar: the overture to Glinka’s 1836 opera A Life for the Tsar. Heavily textured melodies and chords – more like Brahms than anything Russian – were played with decisive accuracy and Stephen Bell ensured that the cheerful dance-like passages were a real contrast. The ending of the piece is corny to put it mildly but he delivered it with aplomb.

Then we had a dart forward to the twentieth century and to Armenia – which for most of Alexander Arutunian’s (1920-2012) life was part of USSR – so in a sense his one movement trumpet concerto sustains the Russian theme. Soloist Gareth Small produced a very attractive creamy sound with some beautifully sustained phrasing. The elegant piece is free of atonality and full of lush harmonies and Shostakovitch-like jazzy rhythms. It was a pleasing sixteen minutes. 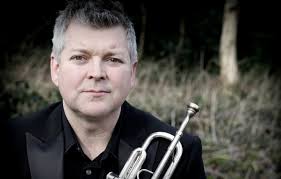 It is a pity though that Arutunian’s name does not, apparently, fill The Brighton Dome because there were far more empty seats than usual. If you chose not to come you missed a real treat, in the highlight which came after the interval – a breathtaking account of Tchaikovsky’s fourth symphony.

Stephen Bell took the first movement at a measured, intelligent tempo with lovingly punctilious attention to balance which made sure, for example, that you heard and noticed the descending scale for horns, the mysterious bassoon passages and the quasi balletic quality of the rhythms. I liked his fluid take on the andantetoo with its pre echoes of the 6th symphony which were leant on attentively.

Then – such a contrast – Tchaikovsky’s pizzicato party of a scherzo was beautifully played, bows down. Stephen Bell, without baton, physically rocking from side to side, shaped the dynamic with immaculate precision and wit. The “wind band” sections were imaginatively slotted in too. And so to the allegro con fuoco finale which was certainly played with plenty of fiery passion in this performance. It blazed its way to a very exciting conclusion followed by well deserved, rapturous applause.

I was very glad indeed to have heard this concert, especially the Tchaikovsky.

This review was first published by Lark Reviews. http://www.larkreviews.co.uk/?cat=3