This conventionally structured concert – a concerto sandwiched by two symphonies –  presented the BPO pared down to classical chamber size, which  ensured a very enjoyable afternoon of crisp incisive clarity. 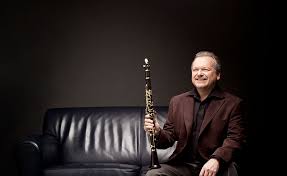 It is not easy to open a concert with one of Haydn’s wafty, exposed introductions – marked largo in this symphony – but it held its own until the movement danced away into the vivace. Michael Collins is a batonless, businesslike, unfussy, measured conductor who went on to bring out all the contrasting charm of the rippling string work in the 6/8 adagio before heading cheerfully into the elegant, nicely played minuet and the chatty presto finale ( prestissimo in this performance) with all its jokes and general pauses.

It’s fun to hear Mozart’s clarinet concerto played on a basset horn. “Quite a beast” joked Michael Collins in his spoken introduction and of course he’s right. The tones are “autumnal” because the range allows for some passages to be played an octave lower than they usually are. He set a lively allegro tempo for the first movement which also featured some fine horn work in passages which sometimes get played down. It’s an art to conduct an orchestra without looking at them. He faces the audience but still manages to hold it all together especially in the notoriously difficult middle movement whose 6/8 is so very slow that it’s almost in 12. He’s a foot tapper – perhaps that’s the secret – bringing out all the wistful beauty of the pianissimo recapitulation complete with grace notes. A delightful performance was rounded off (no pun intended) by a lively and light rondo.

And so to Beethoven’s smiling first symphony which he made sound daisy-fresh rather than something many of the (pretty full) Dome audience will have been listening to all their lives. It’s such a vibrant, happy piece – written long before Beethoven’s demons were biting too hard. Michael Collins, sparky as ever, can even do andante cantabile so that it sings and soars without sounding maudlin. Then came a jewel-like minuet and a lilting finale graced by the sort of playing which makes even a hard-bitten critic grin.