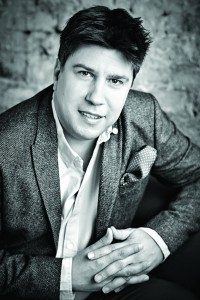 Thomas Carroll, looking as if he’s about to win a snooker tournament in a snazzy red waistcoat, has a knack of bending almost double to coax intricately nuanced pianissimo playing from his players. It’s effective too. Almost all the playing in this very pleasant concert was sensitive and well balanced.

After a momentarily ragged start Mozart’s K201, with all its sophisticated simplicity, soon settled into a suitably crisp, sparkling opening allegro with the following movements in careful contrast, For both this, and the Haydn which came next, the Brighton Philharmonic was reduced to just 36 players – strings with two horns and two oboes ensuring that the mood remained light, tight and classical.

The Haydn C major concerto (rediscovered as recently as 1961) is a resolutely cheerful work and multi-talented Carroll conducting from his cello appeared to smile from the sheer joy of the music almost continually. He achieved a fine rapport with the orchestra and his cello sound was lushly mellow especially in the beautiful Adagio and the well controlled Allegro Molto finale.

And so to the concluding Mendelssohn Italian Symphony for a happy ending to a sunny concert – and a few more players and instruments added to the mix. The opening was lively and incisive with some clearly articulated string work in the busy passages which typify much of Mendelssohn’s orchestral writing. One or two wobbly moments in the third movement were soon forgotten once we reached the Saltanella and the glorious conclusion which was played with panache.