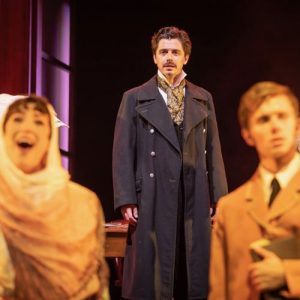 Based on Kahlil Gibran’s 1912 novel, this curiously old fashioned (traditional?) musical is touching without being mawkishly sentimental.

The autobiographical source material tells the story of Gibran’s returning to his native Beirut after spending most of his childhood in America. He falls in love with a girl who is then married against her will to a philandering, rich man who believes that “married men are more desirable” …

Read the rest of this review at Musical Theatre Review: http://musicaltheatrereview.com/broken-wings-theatre-royal-haymarket/