This is Bizet’s Carmen as you’ve never seen it before. Reworked for 2019 Britain, it opens in an NHS hospital. And it’s a bijoux version simply pared down to a 90 minute three hander love (or something) triangle. Musically, under the charismatic direction of Juliane Gallant from piano, it’s spikily strong and the new translation by Mary Franklin, who also directs, and Ashley Pearson is very funny. 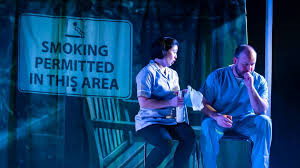 What an inspired idea to have mobile phones playing Carmen tunes and blending them in. At one point the radio is playing in a bar and the presenter is announcing and playing extracts from Carmen. Dan D’Souza, a deliciously gravelly baritone as Escamillio, becomes a posturing football star (“Can I get a cup of coffee, ‘cause I’m not really fit to drive my maserati”) who sings the Toreador song badly in a karaoke bar as a way of showing off to Carmen.  When Carmen is singing the Habenera, Jose bounces a rubber ball in perfect rhythm to provide a gentle percussive underpinning. The whole piece is a light, witty enjoyable concept and full of imaginative ideas until, of course, the last five minutes because, as well all know, it can’t end happily.

Ellie Edmonds (alternating at other performances with Jane Monari as Carmen) has a rich warm singing voice which she uses crisply. She sails adeptly through all the big numbers and acts convincingly which is especially important in the intimate space of the King’s Head. The absurd hip-hop dance she does to Bizet’s music at the beginning of Act II is a moment to treasure too.

Roger Patterson sang Jose on press night – the role is shared with Mike Bradley – and brings a great deal of appropriate tenor angst and passion to it. He is compelling, first as a disillusioned NHS nurse coming to the end of his shift, then as a young man in love, changed after three months in prison and eventually as a thwarted, angry man.

This is a feminist take on Carmen. Written and directed by an all-female team it presents Carmen not as a femme fatale but rather as unfortunate, very plausible, young woman who makes a few fatally bad choices. I rather like that angle.