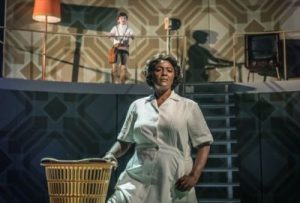 Think The Help spliced with Gone With the Wind, seasoned with the tragic pain of Porgy and Bess. However it’s billed, this glitteringly good show is not musical theatre in the trivialising sense of the term, either. It’s opera!

It’s November 1963 and we’re in Louisiana. Caroline (Sharon D Clarke) is the maid in a Jewish household. She does all the chores but her inner life lies in the basement where she does the laundry (ambidextrous ironing!) The washing machine (talented M’Sha Bryan, in a wonderfully surreal silver and white bubble dress) becomes the argumentative voice in her head. The radio – a chirpy, well choreographed, stunningly costumed trio reminiscent of the three ladies in The Magic Flute – dominates her thoughts too.

But of course the show – which has a large cast for a small space – belongs to Clarke. She is outwardly impassive, most of the time, which makes her astonishing wine-rich voice seem even more eloquent. She dominates the stage (and is rarely off it in two hours 40 minutes – it’s a huge role) and the angry anguish she finds for her second act solo hits you right between the eyes. It’s a remarkable performance.

There’s also delightful work from Albiona Omonua as Caroline’s feisty angry daughter who doesn’t mind standing up for her rights. The tension between her and her mother is beautifully managed. And on press night Charlie Gallacher did well as Noah, the child of the household who leaves money in his pockets for Caroline to find – another large role. On the whole though, it’s less than fair to comment too much on individuals given the overall strength and impact of this show in which every single actor does a fine and integrated job.

Musically it impresses too. Composer Jeanine Tesori gives us a great deal of intricately nuanced contrapuntal singing – and very little of this show is spoken – which stresses the inner complexity of each character’s thoughts. It works exactly as Mozart or Rossinni does. And the accelerando Klezmer style music when the Jewish family celebrate by dancing round the table is masterly as well as fun. The sound balance is excellent and there’s sterling work coming from the nine piece orchestra under MD Nigel Lilley.

I don’t know how this show was staged in 2003 when it premiered on Broadway but it sits very successfully indeed in the fairly intimate space of the Minerva with its circular thrust stage and director Michael Longhurst at the helm. Will this powerful, poignant and ultimately positive show be Chichester’s next London transfer? It certainly deserves to be.