Casting on and off 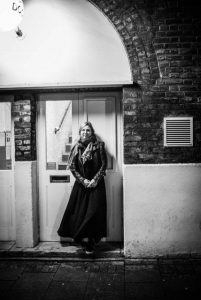 For Jessica Ronane CDG experience is circular. She is, for example, casting director at The Old Vic, the building in which she once trained for as a musical theatre performer. She is best known as casting director for Billy Elliot. “And that took me straight back to my own childhood in dance and stage schools” she says.

Daughter of actor Jack Ronane, she comes from a theatrical family. Her dance teacher Priscilla De Meric, suggested full-time dance school and aged ten she started a nine year stint at Elmhurst. “It shaped me completely. An education like that almost brands you and it has led to everything I’ve done since so I’m very positive about the decision which was made for me” she says, pointing out that a full-time dance education also teaches you hard work and pain management.

That attitude was handy last year when, having just accepted the The Old Vic post, she found herself pregnant with her third child. Old Vic director Matthew Warchus and his staff were unfazed. “They were refreshingly supportive. Matthew’s view was that women have babies and that’s fine” she recalls.  “I worked up to my daughter’s birth last May and then took her in with me until December. Yes it’s perfectly do-able when you have colleagues who confidently and understandingly take such things in their stride.”

Ronane’s adult professional career began with a Bill Kenwright tour as the baby of the company. “It was a light hearted show and fun and we eventually came into the Piccadilly Theatre, in the West End.” Other shows followed. Then came a turning point.

“I was 27 and coming out of a long-term relationship. I wasn’t busy enough professionally and I wanted a change. I was pretty sure I could cast so I went to see Jina Jay whom I knew because I used to babysit her kids.”

Ronane was quite literally in the right place at the right time. By chance producer Jon Finn phoned while she was in Jay’s office. A musical version of Billy Elliot was under discussion and that he needed someone to find boy dancers. “I met choreographer Peter Darling the next day and they took a big gamble on me with my total lack of experience” she grins.

“I had to start completely from scratch and leave no stone unturned” she says. Starting with Elmhurst she contacted every ballet school in the country in search of boys and found many real life Billy Elliot stories. She travelled hundreds of miles to persuade the children, their teachers and parents to let them attend regional workshops with Stephen Daldry and the team. Eventually she found the boys she needed and, in time, arrangements including the famous Billy House and tutors were made for them in London. “Liam Mower, then 10, was one of the first. He also auditioned for, and got a place at, the Royal Ballet School. He’s now a soloist in the Matthew Bourne company” she says fondly.

By the time Billy Elliot closed in London earlier this month Ronane and her colleagues (as it snowballed she was no longer expected to do the job single handedly) had cast 42 Billys. And she continues to “look after” the nationwide Billy Elliot tour which starts this autumn.

Meanwhile she has built up a substantial freelance business. She was, and is, responsible for casting all the children in Matilda the Musical. “When I was first approached it was only expected to be a little short-run Christmas show” she chuckles wryly, telling me that the RSC’s original intention was to use young actors rather than children. “I’ve always cast adults as well as children although that’s not what people associate me with” she says.

And that brings us rather neatly to the Old Vic and her small but attractive office, where she and I are chatting. “I’d worked with Matthew on Matilda and I was offered me this job when he took over from Kevin Spacey. Kevin did three or four shows a year. Matthew is doing seven or eight so there’s a lot of casting to do.”

We are talking the day after the opening of The Caretaker and I have bumped into Timothy Spall on my way into the building. “I love getting to know and work with actors continuously because  it fills the building with energy and my open door policy means that they’re often in here” she says.  And Ronane is gleeful about the forthcoming King Lear with Glenda Jackson in the title role and the number of actors who will have to be cast around her.

So there she is, running her own casting business and holding down a full-time job on what is now a five year contract. At the same time she is bringing up three children all under 10, with her husband Jack Brough who’s Head of Creative Development at  content creation company, The Moment. “We met through Stephen Daldry and had our wedding party at his house because he has become a great friend” she says. “So actually I owe my marriage and my children to Billy Elliot as well as my career.”  It’s another circle completed.