Charlie and the Chocolate Factory – The Musical (Susan Elkin review) 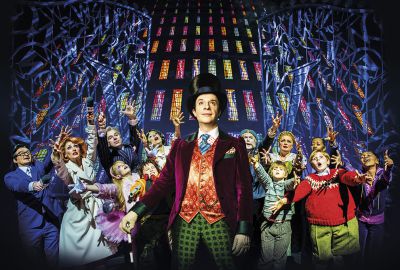 This is one of those shows which makes you beam with delight until your face hurts. From the moment Tony Higgins’s fabulous 14-piece band strikes up (glorious sound!) and you see those large-scale rolling bits of set you know you’re in for one of the jolliest rollercoaster rides in town.

There can’t be many people who don’t know Roald Dahl’s story of Charlie Bucket and his very poor – but feisty – family whose fortunes are restored by Charlie’s winning a golden ticket to tour a rather special chocolate factory. As a piece of musical theatre – with tuneful and witty music and words by Marc Shaiman and Scott Wittman – it works because it’s structured like The Nutcracker. All the plain everyday stuff when Charlie is at home or scavenging on the dump is in the first act and all the escapist, transformational magic is in the second. It’s an old formula but they’re often the best. It means that some of the action in the first act is bulked up for balance but the TV sequences showing the other four children Charlie eventually tours the factory with are a stroke of genius. As set pieces they are brightly funny and each showcases the talents of a child actor.

And what a quintet they were the night I saw it. Each role is shared by four actors so there are twenty children involved. The contrasts between the five are beautifully brought out from earnest, story loving Charlie helping to look after his bedridden grandparents to sausage chumping, fat suited Augustus Gloop styled as a folksy Austrian and the revolting, pink-clad pirouetting Veruca Salt.
Jonathan Slinger plays Willie Wonka with a wonderful blend of delicious campness and low voiced imperiousness – imagine The Mikado played by Julian Clary. Patter songs trip off his tongue and his lyrical numbers are show stoppers. He also delivers irreverent asides with panache.

The ensemble scenes fizz with well directed exuberance especially when they turn into oompa-loompas, their size shortened by false legs at the front – another tried and tested decision but always effective. And sometimes the whole company becomes an ensemble – at one point complete with sparky tap dancing.

At the heart of this show – and a major part of what makes it special – is some spectacular technical theatre. Scenery comes out of the floor or is “flown” down. There’s massive factory machinery which flashes and burps. Projection creates the huge outside factory wall among other things. And every inch of the stage is used in three dimensions. There’s a splendid ultra violet light scene too – it may be an old trick but it never fails.

All in all this show, which pounds along with pulsing energy, is the most fun I’ve had in the theatre in quite a while.

Charlie and the Chocolate Factory - The Musical