When you assess a show professionally you are supposed to judge it as being decent, weak, good or outstanding for a production of its type. Well I haven’t the faintest idea how to star rate this one since I’ve never seen anything remotely like it before and therefore have nothing to measure it against. This was the first circus I’ve been to since childhood and that was so long ago that I remember plumed horses and roaring lions all of which is now illegal in the UK, thank goodness. I’ve seen occasional circus acts in, say, panto or the piazza at Covent Garden but never the whole caboodle. Well, after much thought I’ve decided it’s a four on the simple grounds that I enjoyed it very much and it includes some stunning performances. I have only a couple of minor reservations of which more shortly.

In a sense Circus 1903 is a play-within-a-play. We’re meant to be in an American touring circus of which there were many (remember Barnum and Bailey The Greatest Show on Earth) in the early 20th Century. The year is 1903 and in the first act they are setting up, rehearsing the show and training the elephants: two life-size puppets by Mervyn Millar and Tracy Waller are a theatrical tour de force. They are beautiful – moving, in every sense – and totally convincing. The second half is more or less a performance, with glitzier costumes, beginning with a parade and ending with a finale.

It’s noteworthy that none of the spectacular acts is British or even American. Most are from South America or Eastern Europe. And they are mind-blowingly, heart-in-mouth good. As I watched them I was forcibly struck that what this work needs is three things: phenomenal trust, bodies trained to behave like iron and decades of practice. The “Daring Desafios”, for instance are a quartet of grinning tattooed young men from Brazil who launch themselves to enormous heights from a teeterboard turning double and triple somersaults in the air. The cheerful camaderie they exude belies the skill of the coordination which is like a very fast four man dance.

We also get Roberto Carlos from Mexico juggling, Natalia Leontieva from Russia doing impossible things with spinning hoops and Olava Rocha Muniz and Denise Torres de Souza, also   Brazilian, in a “Russian Cradle”. The latter involves very daring arial work with nail biting mid air throws. The highest (literally) spot for me was two brothers from Colombia on a “wheel of death. It’s a huge structure like a giant egg timer made from metal tubing and mesh and it’s flown slowly down to stage level. One man in each oval space makes it spin – ever faster as they walk, skip, jump and sometimes climb round the outside of it. The top man standing upright almost has his head in the flies. It’s quite an act.

So all in all a fine show. Recorded music is composed and arranged by Evan Jolly who borrows from all sorts of genres including some traditional circus numbers and some atmospheric classical. It works quite well in the first half but becomes far too loud and relentless in the second. The performances are excellent, Adding that level of noise as an enhancement is almost an insult to the acrobats who don’t need their work psyched up like this.

My other reservation is that I really don’t like squirm-inducing gags involving audience children brought on stage and made to look silly and there’s too much of that in this show although David Williamson as ring master is fairly gentle with them. Even I have to admit, however, that it’s very funny when a child is invited to thrust the traditional plate of shaving foam in her own father’s face and does it with glee. 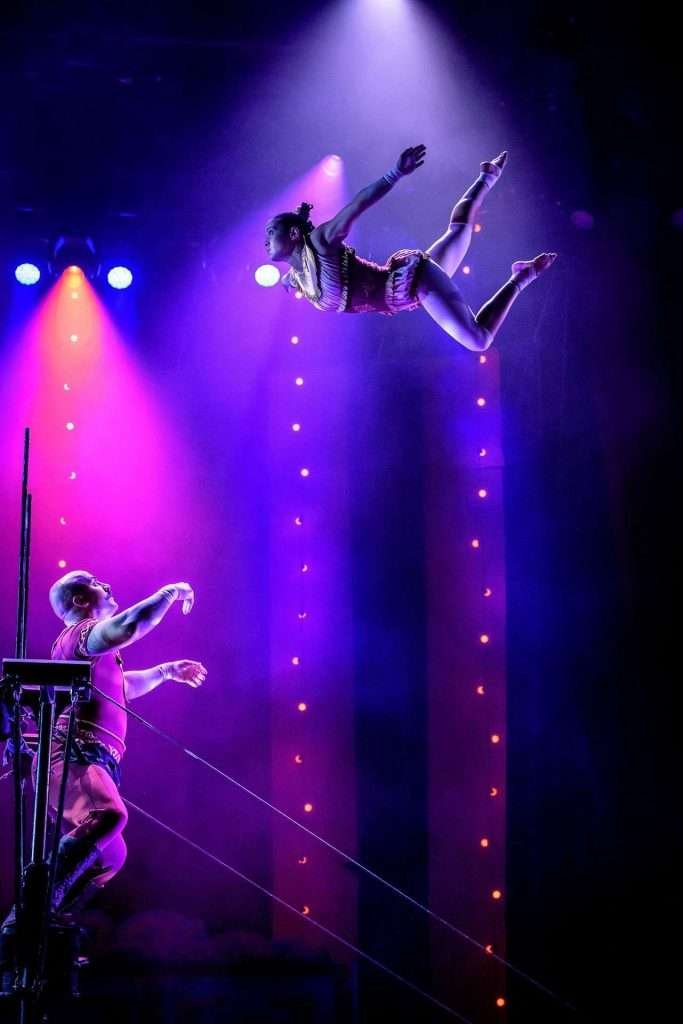 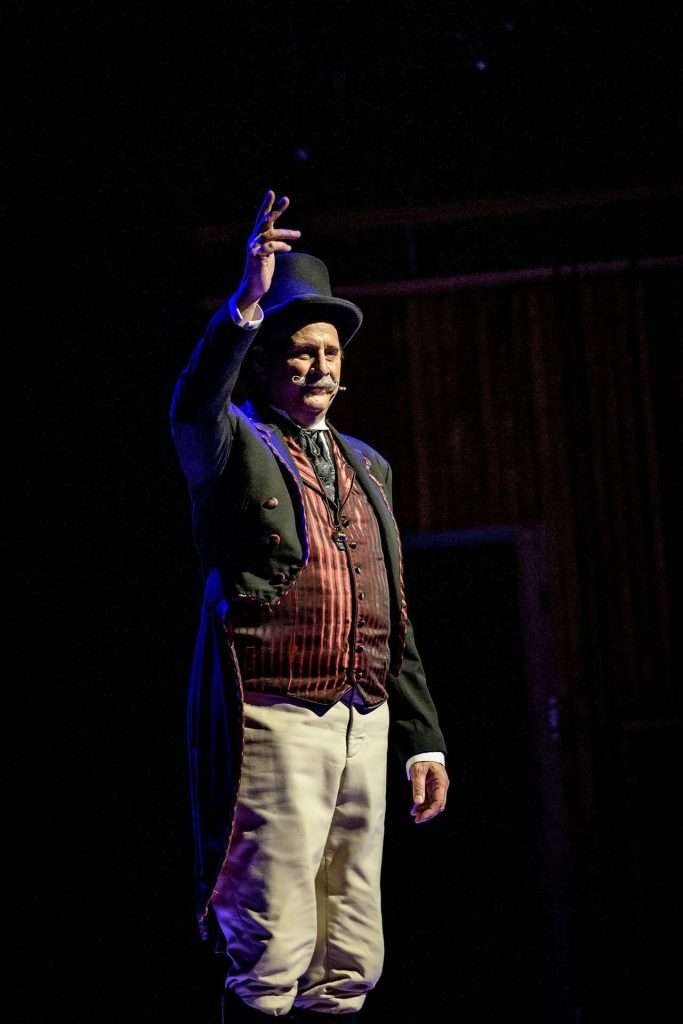 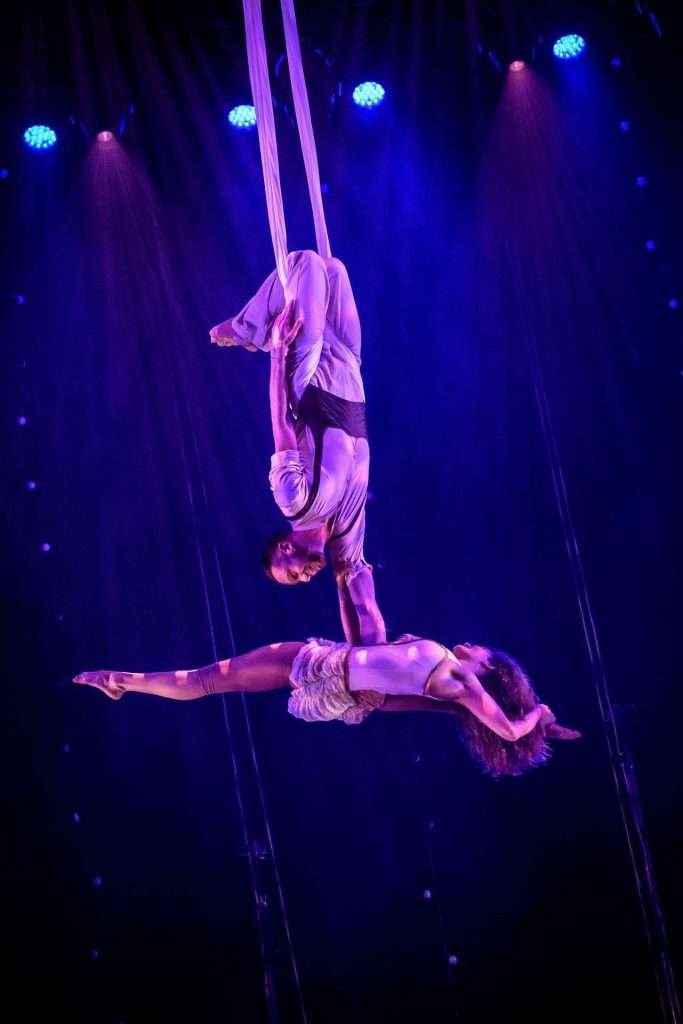 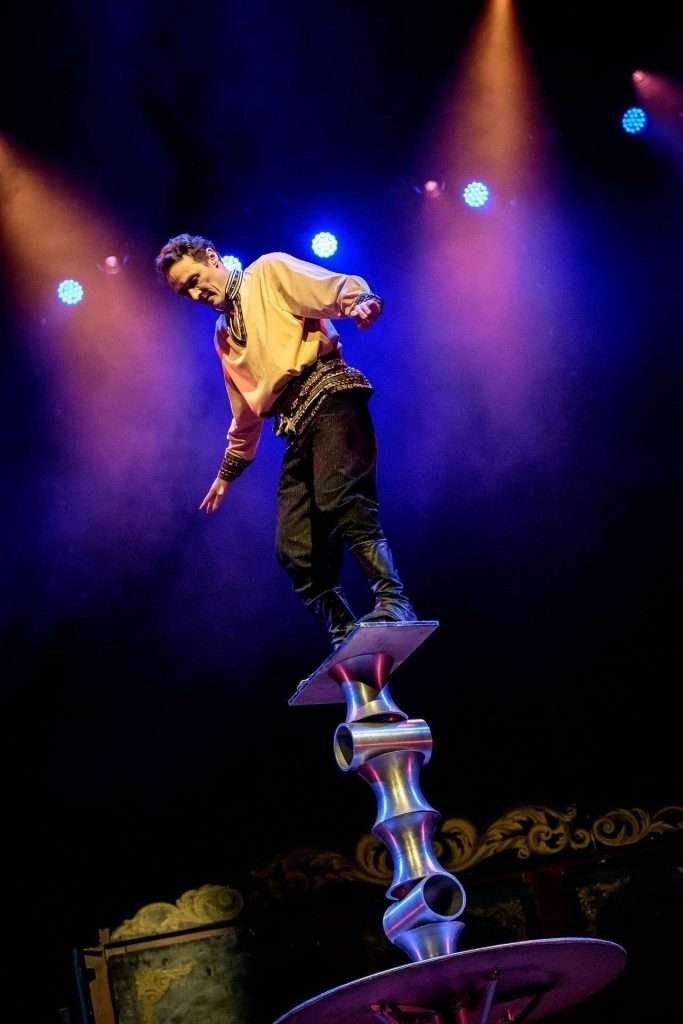