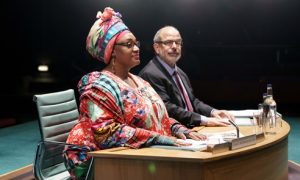 This evidence gathering session at the House of Commons select committee cries out for verbatim theatre. “The object of this session is not to conduct a show trial” is a phrase repeated often, but in a way of course that’s exactly what it is.

The events, which took place in 2015, are riven with dramatic tension as six very competent, clear-thinking MPs push for answers from two people who obfuscate and squirm evasively.

Alan Yentob (Omar Ebrahim) was chairman of the trustees. The charity had lots of friends in government and was awarded many millions of pounds.

Eventually, after years of unwise spending, the charity went bust and it was time to ask some very pertinent questions.

If, for example, Kids Company had 19,000 costly cases, why – when it was wound up – were there only a few hundred to hand over to local authorities?

Why, for example, was one child with mental health problems bought a pair of shoes costing £150? Is it true that some Kids Company money was given to people to pay mortgages?

And underpinning all this is Batmanghelidjh’s worrying assertion that thousands of vulnerable kids will be utterly lost without her charity to support them. There are no answers or conclusions.

As a piece of theatre, to an extent, it entertains as it shocks and is occasionally piercingly funny.

The trouble is that, in this case (unlike London Road) verbatim theatre and musical theatre are an unhappy marriage and the piece would have worked much better as straight theatre (book and lyrics are by Hadley Fraser and Josie Rourke, edited from the transcript of the evidence session).

Tom Deering’s music – played by a fine string quartet led by Torquil Munro on piano – is quite attractive. However, much of it is effectively mood music to tell us that, for example, characters are feeling stressed, and it’s pretty cumbersome.

Yes, there’s singing, but the verbatim text does not provide good lyrics. Characters speak a few sentences. Then they sing some. And it seems clunkily pointless. There’s some quite nifty chorale work to emphasise specific lines, but it doesn’t really add much.

Of course there are some notable individual performances. Sandra Marvin looks every inch the part and sings with plenty of warmth and passion.

Ebrahim has a magnificent operatic bass voice but it seemed almost incongruous in this context.

None of this, however, stops this from being a pretty unsatisfactory show. Directed by Adam Penford, it’s an interesting idea, but just in the wrong medium.