A Complete Works for 21st century 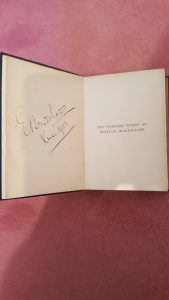 The New Oxford Shakespeare the Complete Works has just arrived and it has set me reminiscing.

My only other complete works is a nice old edition, which I had rebound in 2008 because it was falling to pieces. It was bequeathed me in 1974 by my lovely grandmother-in-law who knew a Shakespeare enthusiast when she saw one. She’d been given it by her uncle in 1913 when she was 22 and it had been very well read. Yes, she knew all the plays and also used it regularly for help with Daily Telegraph crossword which she did every day.

Since her death, I’ve used it for forty two years for quick access and reference. That’s as well as, of course, having copies of nearly all the plays and in some cases several editions even after recent pruning related to moving house.

I can’t help comparing the old with the new. Traditionally a Complete Works simply provided the bare text – often with very ancient editing to keep the price down. No so The New Oxford Shakespeare the Complete Works which does several very interesting and welcome things.

First the plays have been edited with modern scholarship and there are a few pages of information and views about each play before the text along with occasional black and white photographs. Information includes comments by actors, directors, critics and academics and there’s a timeline for each play detailing some of its production history. All of this is very useful, especially for students who may be new to whichever play it is.

Second, there are glosses in the form of footnotes – not usual in a Complete Works. These are informative although sometimes a bit banal and arguably unnecessary. As the late, great Shakespeare education guru, Rex Gibson, used to say, not even the youngest child needs an explanation for “hurly burly”. It’s absolutely obvious from the context. There’s a fine line between elucidation and the sort of laboured translation which actually erects a barrier between the reader and the language. Many of the footnotes, are however, welcome and it’s a valuable idea in principle.

Third, I’m delighted to see the plays printed in the order in which they were written rather than alphabetically or grouped according to some unworkable Polonius-style category system. It give a real sense of the playwright’s developing and changing talent along with historical context.

I’m not sure whether students are still blithely told to read all of Shakespeare’s plays before or during their English degree courses. Are drama students advised to read them all? If they are then this would be a fine edition to use.

As for me, I shall use it if/when I need to read one of the few plays which remain unfamiliar and of which I don’t have a specific copy. It’s probably time I read Venus and Adonis properly for example. And also included here – in one volume – are all those co-written, and questionable authorship plays such as The Spanish Tragedy and The History of Cardenio. It’s an extraordinarily comprehensive volume and really sets a new standard for books of this type.

But that comprehensiveness that makes for its only disadvantage. It weighs 2.75kg. Don’t try and carry it about with you or read it in bed. You also have to treat it with care because the paper is, perforce (3382 pages) Bible-thin and fragile so it’s a read-at-a-desk job.  I doubt that Grannie would have been able to lift it. I shall continue to keep her copy handy too for really quick reference without the literary answer to a gym workout. 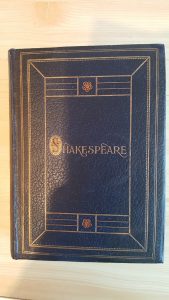