It’s a good time to be a female actor. It would seem that, suddenly, all the barriers have lifted. This year saw Golda Rosheval at Liverpool Everyman playing Othello as a female general in a lesbian relationship with her white Desdemona. Last week we heard that Kathryn Hunter is to play Timon of Athens for the RSC and that Jack Lowden and Hayley Atwell are to alternate the roles of the Deputy and the Novice in Donmar Warehouse’s forthcoming Measure for Measure. Michelle Terry has played Hamlet at The Globe this year too. And don’t let’s forget Glenda Jackson’s recent, award winning Lear at The Old Vic.

Of course, none of this is new. Frances de la Tour played Hamlet in 1979 and Fiona Shaw did a stunning Richard II in 1995. Maxine Peake gave us her Hamlet in 2014 and Michelle Terry’s Open Air Theatre Henry V was memorable in 2016. And I could cite other examples all the way back to Sarah Bernhardt.

It’s just that now it seems to have become so ubiquitous that it’s if no director or casting director dares cast a Shakespeare play conventionally.  And it all feels to me a bit  manic and contrived – a sort of industrial over compensation for several centuries of doing plays according to the conventions of the social period in which they were written. I also sense some vying with each other to see who can come up with the most unlikely bit of gender blind casting.

I don’t want to see women side-lined, obviously, and there are some fantastic plays with plum parts for them –  all of Ibsen, Alan Bennett and Oscar Wilde for example to cite just three random examples. And Shakespeare did give us Cleopatra, Juliet, Viola, Isabella, Katerina and many more. Then there are dozens of roles within the plays which really can happily be played by either sex. Victoria Blunt, for instance, at Watermill Theatre this year was one of the best Bottoms I’ve ever seen. I saw a brilliant female Banquo (sorry – I don’t remember the actor’s name and I no longer have the programme) at Open Air Theatre a few years ago. And has anyone ever done a female Shylock? It could work well because there are no sexual politics in the role.

But when it comes to sexually charged roles such as Othello or Angelo then changing the genders completely alters the thrust of the play and flies in the face of the text. Measure for Measure is a case in point. Angelo is, initially to his own surprise and chagrin, a ruthless sexual predator. It’s Harvey Weinstein stuff. He’s a powerful male, threateningly and manipulatively demanding sex with a young woman in a vulnerable position. That’s the situation. It’s all in the script. Perhaps I’ve led a sheltered life but in my experience even the most tyrannical of women can’t actually force an uncooperative man to have sex with her whatever she promises him. She can’t rape him. And even if she could  there’s arguably less at stake for a man than a woman. But I digress. None of that it what the play is about.  And that is my point.

Actually if you want to cast Measure for Measure gender blind you could do it, successfully with almost any other part – The Duke, Escalus or Pompey, say – but not the two central ones. And that’s just an example of a single play. How long will it be before we see a contorted, distorted gender reversed Macbeth and Lady Macbeth  or Gertrude and Claudius and a text which has had to be heavily doctored to make it make any sense at all?

There is room, obviously, for as many interpretations as there are directors and actors and it’s good to experiment with innovative ways of doing these plays. But surely that’s all it should be? It seems neither sensible nor balanced to allow it to become the norm and if you have to rewrite the play to accommodate your innovation then perhaps you should do a different play altogether?  Personally I don’t want us to get to the stage that you actually have to hunt for a production which is remotely conventional in its casting and telling the story which Shakespeare dramatised.

I think the industry needs to be careful too. It’s all very well taking the view that you should cast as many women as possible even in wildly unlikely roles because we’re all very PC and liberal. What about the audience? I had lunch recently with a distant cousin whom I hadn’t seen for decades. To my delight she’s morphed into an enthusiastic theatre goer and we talked about lots of shows she’d seen. But she was utterly scathing about Sally Cookson’s Jane Eyre, which for the record, I liked very much. She dismissed it as “modernised and ridiculous with lots of running up and down ladders”. In other words, her tastes are traditional. I hate to imagine what she’d think about some of the more extreme gender-blind casting around at the moment. And there are millions of ticket buyers exactly like her out there.

A few years ago I saw a production of Don Giovanni in a gay night club (Heaven, at Charing Cross). All the genders were reversed except the title role. It was an interesting and quite enjoyable experiment although some of the numbers were in changed keys to accommodate different voices which took a while to get used to. Fun, but of course I don’t want all my Mozart served up like that. It’s the same with other forms of performing arts. We need balance and we need choice. The trouble with common sense, as Voltaire reminded us, is that it isn’t very common. 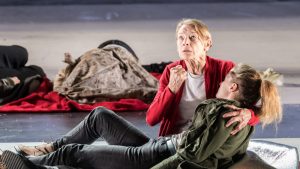