Crazy for You (Susan Elkin reviews) 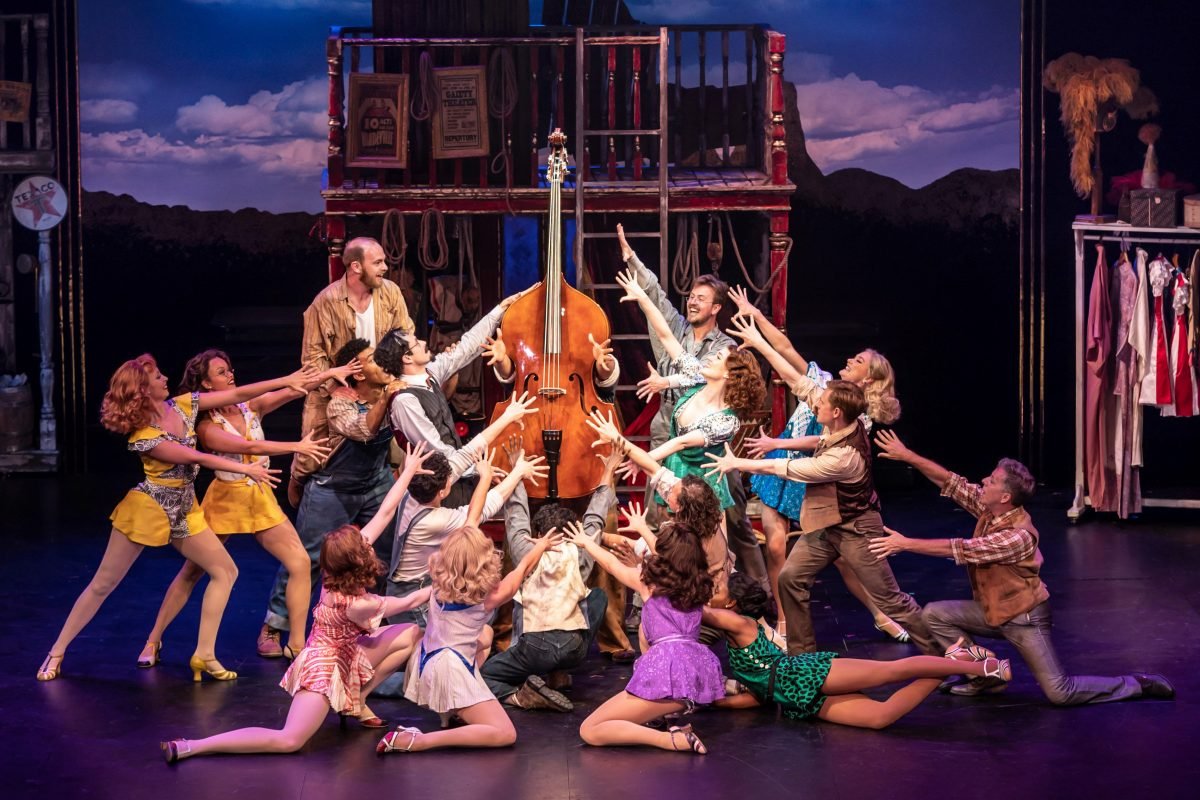 Show: Crazy For You

Energy comes in many forms: physical, imaginative, musical, emotional, theatrical, choreographic. And this exuberant, happy, funny show packs them all. In spades.

The show itself – with its mistaken identity/disguise plot, about as plausible as Twelfth Night or Cosi fan Tutte – was new to me but of course it pounds along with very familiar Gershwin numbers such as Embraceable You and Naughty Baby. It’s actually a 1992 reworking (by Ken Ludwig) of an earlier show with additional Gershwin songs to push the plot. Susan Stroman, who directs this production, has long been a driving force in the show’s ongoing life.

In short, Bobby Child, engaged to a woman he doesn’t love, wants to be a dancer rather than running the family bank. So he escapes to Nevada where, after various plot twists, he helps to restore a derelict theatre and falls in love with the daughter of the owner. And they all lived happily ever after – or something.

Stroman’s choreography is glitteringly original. In I’ve Got Rhythm, the first act finale, for instance, she gives us something new to marvel at every few seconds in a scene which runs for nearly eight minutes. The ensemble groups, and regroups like a musical kaleidoscope. No wonder many press night audience members leapt  excitedly to their feet when it finished although we were only half way through the show.

She knows how to get the best – spectacularly so –  out of her accomplished cast too. Carly Anderson is terrific as Polly – she sings with passion and verve and dances in a whole range of styles. Tom Edden excels too as the Hungarian theatre impressario, Bela Zangler who eventually comes out to Nevada to see what’s going on. He has a lot of fun with this part and is very funny. And there’s a fabulous ensemble with lots of small roles, immaculately performed, in this fine show. There’s a lovely sequence with a double bass for instance – as much part of the choreography as the sound.

And as for Charlie Stemp as Bobby Child well, of course, he’s a show-stealer. His style lying somewhere between Tommy Steele and Fred Astaire spliced with his own magic, he oozes so much charisma and talent that he gets a round of applause simply for his first appearance on stage – like a grand old man of Theatrical Status. And yet he’s only 28 and it’s just six years since his first big show: Half a Sixpence at Chichester. It’s well deserved though. Bobby Child is a huge role. Stemp dances and dances – tap dancing on tables, leaping like Rudolph Nureyev, thowing Anderson and others into the air and much much more. And it’s all done with (apparently) effortless lightness and elegance. He’s a fine actor too bringing out all the humour of the situation when he disguises himself as Bela and confuses Polly. Then there’s his tuneful, nicely articulated singing. The term “star quality” might have been coined for Charlie Stemp.

You’d expect a 16-piece orchestra convened by Andy Barnwell to be strong and it is. Out of sight and under Alan Williams’s musical direction they make sure we hear every note and nuance of the score – and are happily on top of a wide range of styles.

Beowulf Borritt’s set is neatly, imaginatively supportive of the action. It takes us, without fuss, from Bela’s New York Theatre to a depression-hit Nevada town, suggested by tired looking  two storey brown buildings (with doors) which move in and out.

This is a magnificent show. Chichester has a strong track record of producing shows, particularly musicals, which then transfer into the West End. I shall be very surprised if this one doesn’t soon join the list.