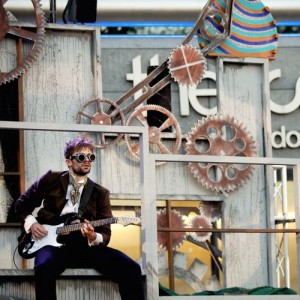 Crime and Punishment – A Rock Musical at The Scoop, as part of London’s Free Open Air Season, continues until 25 September.

St Petersburg in Tzarist Russia is the setting for Dostoyevsky’s famous story of moral (maybe) murder followed by remorse and redemption. In this instance we get it peppered with samey music, mostly by Toyah Willcox (with Simon Darlow), every number illuminated by pop concert-style spinning coloured spotlights – for no apparent narrative reason.

And that’s just one of the show’s incongruities….

Read the rest of this review http://musicaltheatrereview.com/crime-and-punishment-a-rock-musical-the-scoop/