Criticising quotas is not racism

Please do me the courtesy of reading this blog slowly twice before you react. What I’m actually about to say should supersede what you might think (want to think?) I’m saying. “If you can keep your head when …”

I’m an inclusivity advocate. I love colour-blind and gender-blind casting and I’ve publicly sung the praises of talented actors with disabilities many times.

There is, as far as I’m concerned, absolutely no reason why Hamlet shouldn’t be played by a BAME (black, Asian or minority ethnic) wheelchair user provided that a) he (or she) has the acting talent and charisma to carry it off and b) the director can find a way round a few minor practical issues such as the fencing scene.

The point – and it’s a major one – is that the actor, irrespective of all other considerations, must be the best possible interpreter of the role for the work in question. Casting, as directors, tell me almost daily, is eighty per cent of a successful show.

Quotas of any sort, by definition, inhibit that process because they mean that casting is (partly) affected by factors other than the actor’s rightness for the role.

I am not – by any stretch of the imagination –  a racist.  My Collins Dictionary defines racism as “the belief that races have distinctive cultural characteristics determined by hereditary factors and that this endows some races with an intrinsic superiority over others”. Well of course, I don’t believe that.

Neither, from what he wrote last month, in his Daily Mail review of RSC’s The Fantastic Follies of Mrs Rich, does Quentin Letts.

Letts loathed Leo Wringer’s work as Elder Clerimont finding him, “too cool, too mature, not chinless or daft or funny enough”. Well, that’s just one critic’s opinion. I haven’t seen this show and, like many other reviewers, might well disagree with Letts if I did.  But that is his view and fair enough.

He then went on to wonder whether Wringer might have been cast because he is black – by implication as part of a quota. If so then, he opined “the RSC’s clunking approach to politically correct casting has again weakened its stage product.” In other words – quotas and what Letts implicitly identifies as over enthusiasm for sometimes casting the wrong person for the wrong reasons.

What Letts does NOT say is that Wringer’s acting is below par because he’s black.

Quotas, of any sort, are not good news artistically, because they distort and limit. Michelle Terry made this point when she took charge of The Globe earlier this year. She plans, for example, to do a couple of all female plays which adherence to a gender quota would prevent. Good for her – she spotted the law of unforeseen consequences before it bit her.

Drama schools have a major problem with this too. Every one of them wants to be seen to be open handedly enrolling people from every possible background including, obviously, BAME actors and those with disabilities. I’ve get to meet anyone in the industry who isn’t striving for inclusivity. 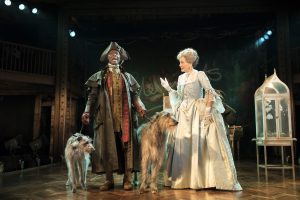 If, however, you have only 30 places to offer on a massively over subscribed acting or musical theatre course then you must award them to the thirty applicants who have the potential to be industry-ready in three years. If they’re taken on for any other reason then your school is taking money under false pretences.

That, I’m sure, is what Gavin Henderson, Principal of Royal Central School of Drama meant when he said recently that “Quotas would reduce the quality of our student intake.”

I have seen hundreds of end-of-course student showcases and I frequently spot several BAME actors, usually male, who are never going to work professionally in the industry. I know that, their teachers know that and so does every casting director in the room. So why were they enrolled on the course in the first place?  Back to those quotas, official or unofficial?

The issue is very clear and it has nothing to do with racism. So why does it elude so many bright, sensible people? Only last week in The Stage we find Lyn Gardner – with whom I usually agree wholeheartedly but not this time – castigating Henderson who, she says “clearly believes that diversity and quality cannot go hand in hand”

No. Sorry, Lyn. That is not what he is saying. Rather, he doesn’t want Central to enrol any individual it cannot train to the same standard as the rest. And it doesn’t matter a jot about background.

The crux of all this is that BAME people represent around 15 to 20% of the UK population. Some of them will, of course, have what it takes to make a career in performance. Consider Paterson Joseph, David Oyelowo, Sope Dirisu and Chiwetel Ejiofor (and many others), for instance. But it was acting ability, potential – and the luck to be spotted –  which got them where they are now, not quotas.

The M in BAME stands for “minority” so you really can’t logically expect to see drama school classes and show casts with more than around one BAME person in five on a crude average. And every cast member should be there for what she or he brings to the role/show and never for any other reason. It should go without saying too, that not every actor, however good, is right for every role which brings us back to Letts and his opinion of Leo Wringer’s performance.

There. Now if you’ve read this right to the end have a nice calming cup of tea immediately. Then take a few breaths and read it again carefully before you accuse me of racist heresy.