Dvorak is to the Czech Philharmonic what, say, Strauss is to the Vienna Philharmonic. It’s in the blood and in this exuberant concert you could hear all that Bohemian ancestry pounding in every bar. And they want to keep it that way, which is why almost every player in the orchestra is Czech. The result is a phenomenal corporate “instrument” which conductor Tomas Netopil, an energetic but businesslike conductor, plays, and plays with, to remarkable effect. By the time we got to the final encore – Brahms Hungarian Dance 5 – he was ready to have fun jokily exaggerating the tempo changes with electrifying precision and I certainly wasn’t the only person who left the auditorium beaming with delight. 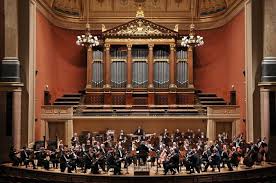 One of the reasons for the distinctive sound is the unusual layout. Tomas Netopil has violas on the right opposite the first violins with cellos and second violins on the inside. Double basses, meanwhile are majestically lined up along the back behind the horns and woodwind on a tier which puts their feet on a level with violinists’ heads. It means that you can often hear both viola and bass parts with unusual clarity and alters the balance of the whole.

The programme was a Dvorak sandwich. We began with the Symphonic Variations in which Dvorak imaginatively explores the fugal form at one point moving from second violins, thence to violas, first violins and cellos in that order. It’s quite a showpiece and doesn’t get as many outings (in the UK at least) as perhaps it should. It’s a very vibrantly orchestrated work which allowed the orchestra to show what all its sections can do.

In the middle we left Dvorak’s homeland and headed to Russia for a splendid performance of Shostakovich’s First Cello Concerto – a work which is very much more on the public radar these days than it used to be because brilliant young players (Guy Johnston, Sheku Kanneh-Mason et al) keep winning major competitions with it. On this occasion Alisa Wielerstein, serious and romantic looking in a statement scarlet dress, played it excitingly with lots of tension. Accompanied by a slightly scaled down orchestra, she took the first movement at a terrific tempo and found a mysterious, plangent but appealingly resolute sound in the moderatomovement. When she finished someone in the audience gasped “oh!” in amazement. It was involuntary, I think, but a very valid testament to Weilerstein’s verve and technique.

And so to the sunny New World Symphony in which the unconventional orchestra layout heightened awareness of the apposition phrasing between lower strings and other sections. And Tomas Nepotil managed to make the largo sound as fresh as if the audience had never heard it before. It was played with warm, affectionate delicacy, especially at the recapitulation of the challengingly familiar first subject.  I loved the effect of the bass pizzicato when you can see and hear every player clearly and the rousing scherzo accomplished all its time signature and key changes so neatly that one was left sighing in admiration at the tightness of that glorious Czech sound. And as for the finale, the speed was so cracking in places that it made my amateur violinist fingers ache even to think about it. But it came off with aplomb.

It’s a long journey home from Basingstoke to where I live in South London and this leisurely concert – with its 7.45 start, two encores and lots of applause – didn’t finish until after 10.00pm. I have rarely been so glad that I made the effort.