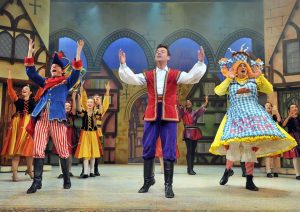 This gleaming Rolls Royce of a pantomime was the season’s opener for me. And it sets a standard so high that I’m hoping all the others awaiting me between now and Christmas won’t seem like second-hand Skodas by comparison.

Stephen Mulhern as Billy brings oodles of stage presence, charm, the sort of boyish good looks which set grannies drooling alongside their granddaughters and, of course, magic. Ben Roddy as Dolly the Cook, four years in the dame role at Canterbury, really has developed a style of his own. His hilarious simper has become a trade mark and his incongruously neat foot work is both funny and clever. Talented Lloyd Hollett – another Canterbury regular – and he have become a terrific double act which often includes Mulhern with all three of them expert in squeezing every drop of fun out of the material.

Jemma Carlisle is suitably sweet – in a feisty sort of way – as Alice and she sings well especially in the love duets with Ben Carruthers whose Dick is attractive without being wet (often a problem with panto heroes) and he too is a fine singer. And Chris Wong’s fine band (slightly too loud, this year) pounds away in support of everything which is happening on stage. You can feel the chemistry between Wong, who has been MD at the Canterbury panto for twenty-two years, and the performers too. It’s a nice moment when he comes onstage to accompany one gentle number with acoustic guitar only.

So what actually marks this panto out? Paul Hendy of Evolution Pantomimes, who both writes the script and directs the show, has a knack of being traditional in an imaginative way. I shall long treasure the “gratuitous comedy routine” which provides thirty-two quick-fire puns on shop names which is very funny. Then there’s a highly ingenious finale ensemble patter song about what makes Britain great. With a whiff of Horrible Histories we get a whole sequence of characters – from David Bowie to Andy Murray and from Winston Churchill to the Spice Girls – running on and off stage to Offenbach’s Can Can tune. And it ends with a self-tribute to the role the Marlowe panto plays in promoting Britishness.

And if you can recruit someone like Vladimir Georgievsky to play Alderman Fitzwarren which means we get a fabulous trampoline sequence in which he pretends to be bad at it but in fact leaves you gasping in admiration, then so much the better. The whole show feels luxuriant too with an adult dance team of eight instead of the usual four and a talented junior cast, some of whom have speaking parts. Some of the special effects are, well, pretty special too. We go underwater with 3D glasses but as soon as you take them off there’s another colossal theatrical surprise.

Above all, perhaps, the jokes don’t seem stale. My favourite of the evening was “Dover for the continent! Isle of Sheppey for the incontinent!”