The Bankes of Dorset 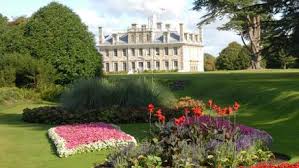 There can be few more romantic and stirring stories in the history of British landed gentry than that of Dorset’s Bankes family in the seventeenth century. Even now you can still feel the excitement of it all as you drive south on the A351 from Wareham towards Swanage and catch that first magical glimpse of the ruined Corfe Castle sitting resolutely on its mound in a gap in the Purbeck hills. Then there’s Kingston Lacy, just twelve miles to the north as the crow flies. It sits in glamorous elegance – redolent with history – just off the leafy B3082 near Wimborne Minster.

Sir John Bankes, Lord Chief Justice, bought the estates dominated by Corfe Castle in 1635. Corfe already had more than five centuries of history to its credit, having begun life just after the Norman conquest and having enjoyed a long innings as as a royal castle for the peripatetic medieval courts. At the time of Sir John’s purchase the castle was in quite a good state of repair and the Bankes family – John and his wife Mary, with children and servants – were able to make it their home.

At the same time Sir John acquired other land in the Isle of Purbeck as well as quickly buying up various other Dorset properties.

The 1630s were strange times. Loyalty to King Charles I was severely strained. A parliamentary ‘party’ who opposed the authoritarianism of the king had evolved and as the years passed there was a pervasive sense that trouble was brewing. Sir John Bankes was a committed royalist. 1642 found him away from his family in the service of the king, beleagured at Oxford. England was divided by civil war.

By the spring of 1643 almost all of Dorset had been taken by parliamentary forces. Corfe, however, was not.  And the indomitable Mary Bankes was determined to keep it that way. Because she received a tip-off that an attack was imminent she was able to barricade herself and her dependents inside the castle where they withstood a weeks-long seige, notwithstanding the destruction of the buildings in Corfe village, the homes of the villagers who were inside the castle with Lady Bankes. Eventually she conceded four small cannon and won a bit a peace and independence.

During the lull, the ever resourceful Lady Bankes – a female crisis manager centuries ahead of her time and right out of synch with the prevailing attitudes of her age –  was able to lay in some provisions and to recruit some extra manpower. Sir John visited his wife and family later in the year before rejoining the King at Oxford where he died in December 1644.

Within six months of becoming a widow Lady Bankes was once again being ambushed at Corfe by parliamentary soldiers in their round-headed helmets. The miniature of her at Kingston Lacy shows a calm intelligent, fairly plain woman gazing thoughtfully at the artist. So impressed was the parliamentarian Colonel Bingham with Mary Bankes’s courage that at the end of the final siege he allowed her to keep the seal and keys of the castle which today are on display at Kingston Lacy. The castle was demolished by act of parliament. In one sense a deadful act of vandalism; in another the creation of one of the prettiest ruins in Britain. It’s wonderfully evocative to wander round and through those ruins with their view for miles in every direction, too.

So what became of her? She went with her children to live in safety at Ruislip, near London. After the Restoration of the monarchy in 1660  some money and land was returned to the Bankes family. Mary’s son, Ralph, was knighted and he moved back to Dorset. His mother died at Blandford in 1661.

Ralph, of course, needed a home: a new family seat, in fact. He commissioned Roger Pratt the architect who worked on the new Kingston Hall, near Wimborne, in the mid-1660’s. Pratt and Ralph Bankes had both travelled in Italy during the interregnum and their architectural ideas were very Italianate. It’s a very tranquil house – appropriately so considering it was built in the peacetime aftermath of a  dreadful civil war. Some of Pratt’s drawings – along with those by Brettingham and Barry for the eighteenth and nineteenth century additions – are fascinatingly displayed in the house today.

Succeeding generations of the colourful Bankes family lived at Kingston Hall, which metamorphosed as Kingston Lacy in the mid nineteenth century,  for over three hundred years  until 1981 when the reclusive Ralph Bankes died.

All the Bankes land: both the Corfe Castle and the Kingston Lacy estates were beqeathed by  Ralph Bankes to the National Trust for public enjoyment and interest. It was one of the biggest legacies to the nation of all time and for those of us who love Dorset this has made it even better. Let’s make the most of it.