What an evening! An inspired pairing with sumptuous singing and two fine, if unfamiliar, scores. It really doesn’t come much better than this.

Ermano Wolf-Ferrari’s 40 minute 1909 comedy features two singers and a silent actor. Countess Susanna (Clare Presland) has secretly taken up smoking when it is still taboo for women. Her husband (Richard Burkhard) smells smoke and assumes she has a lover. There’s a marvellous performance from lithe, expressive John Savourin as the silent but very active, participative butler looking exactly like John Cleese. It’s a lively, cheerful romp with some nice duet work especially in the number in which husband and wife have a gloriously dramatic row. I also loved the hilarious, exotic, quasi-erotic smoking number in which the flute whizzes about wittily in the background. And the reconciliation duet at the end ensures you have something to hum throughout the interval. 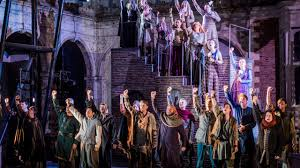 And as for the weightier but beautiful Iolanta, why on earth doesn’t it get more outings? I’m surprised, for example, that the delicious 6|8 number at the beginning with harp and violin melody, into which voices eventually break, isn’t played on Classic FM every day.

The joy of Tchaikovsky is the way he blends joyousness with agony and this score is no exception. A very sparky guest conductor under whom I recently played an amateur performance the fifth symphony said semi-seriously: “Tchaikovsky had a lot of issues – he really did!” when trying to get us to step up the anguish. I thought about that several times while listening to Iolanta.

Based on a play by Henrik Hertz, it’s the story of a blind girl who has been brought  up in ignorance of her disability. Then she falls in love although her father has promised her to someone else. Then a doctor turns up and – well, it’s pretty implausible but the singing is fabulous. Natalya Romaniw, who sings with stunning balance and colour, brings all the appropriate passion, naivety and, eventually, emotional maturity to Iolanta as her world is flooded with light. An accolade too for Laura Woods as her friend Marta. She has a voice like good claret and plays this role with warmth, dignity and intelligence. The final, rousing chorus number – exquisitely staged and sung – will haunt me for ages too.

I’m slightly less sure about Takis’s set which includes a large transparent blind across the back of the stage – reminiscent of the one in my over-bath shower at home although this one shimmers in the hanging lights which represent flowers. You can see “off stage” action through it but to me, it’s a bit trite and obvious.

Full marks to John Wilkie who conducts Il segreto di Susanna and to Sian Edwards for Iolanta. Both coax magnificent sounds from the City of London Sinfonia. I’m always impressed with the way the balance works at Opera Holland Park given the huge width of the area which acts as a level “pit”.