So what do Delius and Puccini have in common? Both entered short operas for competitions sponsored by the publisher Sonzogno – the former in 1902 and the latter (while still a student) in 1883. Neither won. But here they both are, courtesy of the ever imaginative Opera Holland Park.

It’s easy to see why Margot La Rouge didn’t impress the adjudicators. It’s a simple tale of a girl whose rediscovered lover is killed by another contender whom Anna kills in revenge. Although some of the orchestration is magnificent – including a storm with horns, timps, racing scales and I loved the passionate tenor sound of Samuel Sakker’s voice – generally speaking the piece is pretty one dimensional. He finds his former love, Margot (Anne Sophie Duprels) working as a prostitute so the piece is glued together with all the usual nineteenth century hypocritical moral horror of prostitution. And it’s a pity, English surtitles notwithstanding, when you can’t hear the diction. Had I not known, I probably would not have noticed that the piece is sung in French.

After the interval the mood is quite different. Puccini was a melodist though and through and much of the music in Le Villi is rich and warm with hints of what lay ahead in his later major successes. The piece opens with a big engagement party for Anna (Duprels again – really coming into her own this time) and Roberto (Peter Auty). A black clad chorus dance in lilting 3|4 round the front of takis’s ring-shaped stage extension with the orchestra behind them and we’re immediately in a very convincing dramatic world.

The construction is odd, though. Once Roberto has left on a business trip (sort of) to Anna’s distress, the plot snaps shut like a telescope. Stephen Gadd (lots of gravitas) explains in spoken words that Roberto has been corrupted and debauched. We see nothing of his journey or Anna’s death from a broken heart. Next thing you know she’s in a coffin while Puccini winches up the emotion as only he can.

It gets better after that. Roberto returns in agonised repentance (beautiful aria from Auty) and is then haunted and killed by Anna’s vengeful ghost. The dancing Villi, white veils and evocative choreography have terrific dramatic impact and Puccini’s use of violas to connote terror will stay with me for a long time.

The set by takis works well in both operas. We are given a centre stage building constructed with rough planks which is manually revolved to provide scene changes. Outside incidents, such as people running to escape the storm or Roberto returning from his moral wilderness are played elsewhere on Opera Holland Park’s vast stage.

Congratulations, too, to conductor Francesco Cilluffo who keeps orchestra and singers firmly but fluidly under control. Only once or twice did the balance go awry so that the orchestra was drowning out the singing. 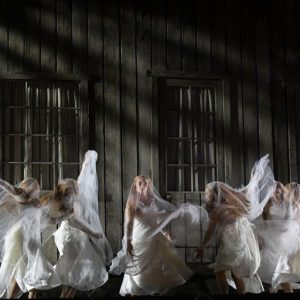