They Drink It In The Congo (Susan Elkin reviews) 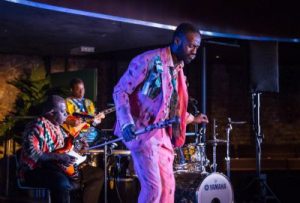 If we accept that the appalling problems of the war-torn Congo are entirely the fault of European colonisers all the way back to the Portuguese in the 14th Century, the next question is what do we do about it now? Is it better the mount a festival in London with poetry and music to build awareness or should we work directly with, for example, the 12% of all Congolese women who have been raped? That is the tension which lies at the heart of Adam Brace’s ambitious new play.

Well, it has its moments and strengths. Most of the play is set in London but the first half ends with a pretty riveting scene in the Congo in which the floor of the in-the-round playing space opens (lovely work from designer, Jon Bausor) to reveal a hot, busy, ruthless mine producing the minerals for western technology. It’s followed by a gentle domestic scene in a quiet hut which is then dramatically – devastatingly – disrupted as the real horror of life for many Congolese is graphically revealed. Meanwhile Giles Thomas’s sound track does clever things to evoke the sounds of Africa so colourfully that you can almost smell it.

And warmest congratulations to Fiona Button as Stef, the British government employee who is passionately trying to organise the festival Congo Voice. She is an outstandingly naturalistic actor whose performance is so finely judged that her acting is virtually invisible – to such an extent that others on stage with her sometimes seem to be merely speaking lines. Richard Goulding, as Tony the tiresome PR and ex boyfriend, plays off her well though and there’s a charismatic performance from Anna Maria Nabirye as Anne Marie, the London based Congolese woman who runs a charity. The onstage band is entertaining in the second half too.

Brace’s script is often funny and actors, well enough directed by Mike Longhurst, all do their best to provide pace and variety but in general this play is far too long and often unacceptably didactic.

The history of the Congo is not well known or understood which is – of course – a major part of its problem. Brace has attempted to weave information (a lot of information) into the dialogue but it often feels very wordy and contrived.

Also less than successful is the use of Sule Rimi, talented as he is, as a sort of on-stage voiceover speaking aloud, for example emails which characters are reading on their phones. He floats about in a pink suit, adding confusion but not much else.

Then there’s the oddly clumsy use of surtitles. Initially characters are speaking English but in order to indicate that they’re actually speaking Lingala (I think) we get a translation into it. Then, later in the piece, it’s done the other way round. Goodness knows why.

The show’s title comes, by the way, from a 1980s TV ad for a drink and is meant, one presumes, to encapsulate British ignorance about the Congo. As a deliberately tiresome joke, it’s a bit overdone in this rather average show. 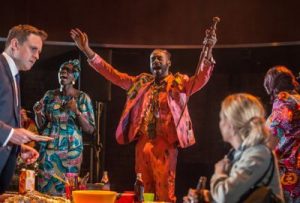