Note: A few years ago I was commissioned to write pieces for a series of American humour books. They were meant to be “wittily informative”. Hmm. In the event most of them weren’t used because the company went out of business. I’ve decided to publish them here on an occasional basis rather than leaving them in a archived (dead?)  computer file.  They’re not exactly belly laugh funny but they might raise the odd grin. This is the first. 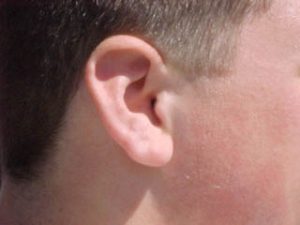 For Shakespeare’s Cleopatra ears were just something to be filled full of Antony as often as possible like certain other of her orifices.  ‘Ram thou thy fruitful tidings in mine ears that have long been barren’ she pleads sexily.

To a European law enforcer right into the seventeenth century ears were an easy (dispensable?)  item to slice off or ‘dock’ – for which read mutilate in the most painful possible way –  on any criminal  he wanted to make an example of.

Ears are funny too, especially if they stick out.  How seriously can you take  Prince Charles, heir  to the British throne, with those taxi doors on the side of his head?  Some people can twitch them at will and you can buy special scissors to trim unwanted hair which sprouts out of them like grass.   And for Disney’s Dumbo ears became wings and people really did see an elephant fly.

The pinna – that’s the fleshy trumpet – leads via the ear canal into two tiny but vital chambers: the middle ear and the inner ear.  Think of it as a journey. Imagine you’re a sound wave.

First you go along the waxy-walled ear canal. Then you meet the ear drum – a  sensitive vibrating membrane called the tympanum which is stretched across the entrance to the middle ear. You – the sound wave – pass across and through it. Your next adventure is the crossing of the cavity of the middle ear. You do it via a mini bridge formed by the body’s three smallest bones.  They’re actually called ossicles rather then bones to remind you how titchy they are. This pretty little trio are imaginatively shaped like a mallet, an anvil and a stirrup and they  lead the way across the void to the oval window which is  the gateway  to the inner ear.

But before we penetrate the depths of the inner ear, stop being a sound wave for a minute and think about pressure. Know that feeling when you’re in a deep tunnel or an  aircraft and you don’t adjust immediately to the changed pressure so your  ears block? That’s because the atmospheric pressure in the middle ear cavity needs changing.  Yawning will do the trick. So will swallowing (one of the airline’s boiled sweets if you’re really lucky, or your own mints if you’re not) because of the handy little  Eustachian tube which runs from one corner of the middle ear through to your nice airy throat.

To the inner ear. It’s fluid filled and includes the cochlea and the semi-circular canals.  The former looks like a coiled-up snail and it transmits the sound along its branch of the auditory nerve – aka as cranial nerve VII – safely home into the brain where it gets sorted out and interpreted.

The semi-circular canals do a separate job in this diminutive, but busy, corner of the body. And they have their own hotline to the auditory nerve.  There are three of the them  and each lies  in a different  plane across the other two. Together they control your balance.  If they go wrong you fall over, get vertigo, feel dizzy  or something worse.  That’s why a severe inner ear infection can affect balance.

Perhaps it’s a good job Cleopatra didn’t know all that.  It might have taken the edge off things. 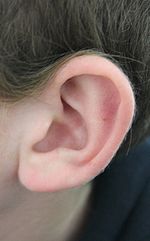