Ever After (Susan Elkin reviews)

Show: EverAfter – A Mixed Up Fairyt 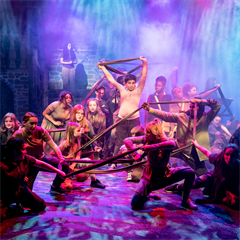 EverAfter – A Mixed Up Fairytale!

Chickenshed doesn’t believe in doing things by halves. A cast of 800 young people – yes, 800 (but not all at once) – and 23 adults demonstrate, yet again, just what this famously diverse, inclusive theatre company can do, even when their work has been pandemic-curtailed for much of this year.

This show which owes a tiny conceptual debt to Sondheim’s Into the Woods, is a reworking of a show which Chickenshed staged in 2006 and it does exactly what its strapline promises. It mixes up fairy tales with lots of song, spectacle and flair.

At the heart of it we have the brothers Grimm and one of them (Lauren Cambridge) is female. Cue for witty, topical comments about gender constructs and patriarchal assumptions. They are trying to write stories, and the dynamic between them is quite fun, but their characters keep escaping. The overarching narrative is Hansel and Gretel who are lost so their father (Ashley Driver) is on a quest to find them despite the machinations of, for example, Rumpelstiltskin (Michael Bossise) and the Queen (Gemilla Shamruk)  mother of the dancing princesses.

Bossise is statuesque, astonishingly adept on his stilts and has a magnificent basso profundo singing voice. He also has a good line in sounding very plausible when of course his character is up to no good at all. Bethany Hamlin as Hansel and Gretel’s stepmother/witch has oodles of stage presence – lots of flounce and venom – and she sings beautifully.

I really like the idea of pairing BSL signers – who are often accomplished acrobats, singers and actors in their own right – to characters so they seem like an alter ego. Demar Lambert, for instance, “represents” Rumpelstiltskin and adds another whole layer to the character. I don’t remember this being quite so overt in previous Chickenshed shows so maybe this is the handprint of Belinda McGuirk, directing for the first time.

Another Chickenshed trademark is to give short single verse solos to lots of children – as well as the adult big numbers –  so we see a lot of talent and teamwork as the show proceeds.

The 23 adults – 12 staff members and 11 students or trainees – are in every performance. The children work in four rotas and I saw the Green Rota in action. And the best moments in this show are when the stage fills up with them, immaculate, dynamic choreography (by a team) ensuring that they form groups, shapes and rhythms like a professional army. Some of the children have special needs of various sorts and it’s a lump-in-the-throat joy to see the slick way they are involved, supported and fully included. Even the curtain call is a work of art with over two hundred people on stage – and I’m told that back stage discipline, always good, is now calmer and better organised than ever because there’s a one way system which everyone adheres to. Professionalism at its best.