Fighting Alzheimer’s on the dance floor?

Barn dancing as Alzheimer’s therapy? Well why not? It’s probably a marginally better bet than some of the fragile straws you are led to clutch when you live with Ms Alzheimer’s.

Last weekend we went to a ceilidh/barn dance in a village hall on the Romney Marsh in Kent. Run by the two year old Romney March Morris side (yes, it’s OK, thanks I know all the jokes about about buggery and morris dancing), it was a charity event to support the child of one of their number, and others like him, suffering from a rare and life threatening disease.

Because our parents were heavily involved in the 1960s folk revival my sister and I grew up steeped in this sort of thing. And our father, Ken Hillyer, led a fine and very respected ceilidh band, The Southerners, for decades. Later in life when rheumatism made three hours with his fiddle under his chin a bit difficult, he successfully reinvented himself as a barn dance caller for hire.

My sister has now returned to her/our roots and recently taken up fiddling for  Romney Marsh Morris (as well as playing classical music with me in other contexts). When she invited us to the barn dance I was very curious to see how My Loved One would cope with it. It isn’t as though it was new to him. In the early years of our marriage we did a great deal of square, folk, country and other vaguely traditional forms of dance – through the clubs, events and venues I’d known most of my life. And when we moved to the Midlands for a few years, we joined a local group in order to meet like minded people. It’s been a while, though.

So there we were, feeling as if we were in a time warp, at this wonderfully English – amateurish but efficient – hop. How would MLO fare? I first got him on his feet to do a simple longways set dance. “Bemused” is a polite word for how he looked but somehow we coped. Apart from anything else, it was a good example of how kind other people are. Barn dances are friendly, family orientated events and the man next to him could see the problem instantly. Every time (we did the dance eight times through) MLO had to cast away from me with the other men our new friend steered him until I could grab him again at the other end of the set. Not once did he remember what he had to do which, objectively, I thought was interesting. A combination of short term memory loss and diminishing spatial awareness doesn’t help much in a folk dance.

He did it, though which pleased me. Sadly, he said afterwards that he felt stupid and didn’t want to spoil things for others. Of course he hadn’t spoiled anything for anybody. There were plenty of people there who hadn’t got a clue and it didn’t matter at all – but I didn’t manage to get him up again until the very end of the evening. “Come on,” I said “You’ll be OK with Circassian Circle because – you remember? –  it’s a couple dance and I’ll be there all the time.” And so it proved.  I think he actually remembered the dance from years ago and even managed to feel the rhythm – more or less. At the end he was smiling and laughing as you’re meant to at the end of a cheerful dance and a rather uplifting evening.

Will we make a habit of it? I wouldn’t rule it out if the opportunity arises. MLO raises his game when he’s in a social space with other people and that’s got to be a good thing. As for the dance itself, I think there probably is some mileage in it as Alzheimer’s therapy because it exercises the memory and encourages you to move independently. Decades ago, my mother used to teach folk dancing to a group of adults with learning difficulties (as we’d now describe them) at Leybourne Grange near Maidstone. She was always impressed with, and moved by, what a lot they seemed to get out of it and I suppose this is the same sort of thing. I also remember, one of the groups the parents were tied up with went regularly to Dorton House, a school for the blind, near Sevenoaks to help with an early evening folk dance club and I often went too. Formation dancing – because that’s effectively what most of it is – did wonders for the confidence of children who couldn’t see where they were going. They had great fun too.

I reckon, therefore, that many Alzheimer’s folk could probably benefit. Most are elderly of course but most of this sort of dancing requires only a rhythmic walk. No arabesques or somersaults are required. And the gentle exercise gained is a bonus. 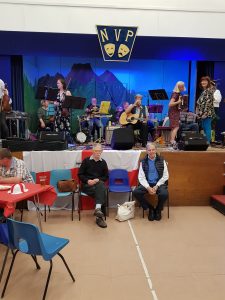