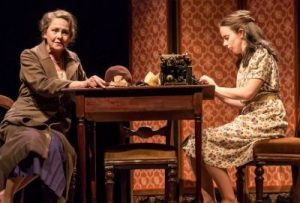 The stereotypes are so familiar: the overbearing garrulous mother, the timid daughter, the son who is itching to follow his long gone father – and finally the outsider who highlights what is going on in the Wingfields’ modest apartment. And yet in Tennessee Williams’ 1944 play, his first great success, each character is so poignantly drawn that this great classic of twentieth century theatre hits you square in the guts every time.

John Tiffany’s sharp but delicate take on The Glass Menagerie has transferred from Broadway with a cast which is three quarters American which adds another layer of authenticity. And what a cast they are. As Amanda Wingfield, Cherry Jones flounces, pleads, manipulates, rages and shows off, digging deep into the complexity of this troubled tense woman, an abandoned wife in denial who remembers the past as she would like it to have been rather than as it was. It’s a magnificent performance.

Kate O’Flynn is very strong as the pitiful, shy, disabled (in almost every sense) Laura. Michael Esper as Tom, who also acts as a quasi narrator “creating truth out of illusion”, is ill at ease, decent but desperate. Brian J Smith delights as the attractive – but also flawed in his way – Gentleman Caller, who comes to dinner and lets the audience see just how disfunctional the Wingfields really are, struggling in the 1930s south where cigarettes cost 15 cents a pack and Esper’s character is working in a warehouse to earn the 65 dollars a week the family are living on. “Time is the longest distance between two places” as Williams makes Tom observe.

It’s a glitteringly fine account of a play which explores fragile family dynamics – almost as fragile as the glass animals in Laura’s precious collection which she uses as a substitute for almost everything else. Williams called it a “memory play” and Tiffany makes us fully aware that we aren’t quite in real life, Each character is remembering the past differently. Remembered truth is a slippery concept, we realise as Kate O’Flynn’s Laura tells Smith’s character how she remembers him in the The Pirates of Penzance at high school but he barely acknowledges that it ever happened. And that scene between Laura and the Gentleman Caller is pointed up here as the saddest and affecting in the whole piece as we grope in the world of what might have been. 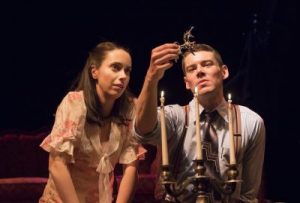