Many years ago I worked with a thirty something woman whose husband, Bill, had died a year or two before I met her. I think he was a bit older than her but not that much. When I knew her she was bringing up two children on her own. Both had Duchenne Muscular Dystrophy, a genetic, degenerative condition which destroys the muscles including, eventually the heart. The elder one, then about ten, was already unable to walk and confined to a wheelchair. There was, of course, very little money and she worked full-time in the laundry of the residential special school where I was teaching. Her elder child was in my class. Her situation was both tragic and desperate and yet, somehow, she  usually found the strength to be fairly cheerful.

One day she said to me: “At home amongst ourselves we talk about Bill as if he’s still alive”. Brash, inexperienced and in my mid-twenties I thought this was maudlin to the point of being unhealthy and faintly revolting.

Since Nick died last year the “boys” (48 and 44 but I’m their mother so …)  and I have talked about him a lot. It happens all the time when we’re together. Death may take away physical presence and a few useless old bits of skin and bone but it cannot destroy the memories, the jokes, the imperfections and even remembered irritations, when someone has been central to your existence for three quarters of your life in my case and hundred per cent of it for the boys.

Of course you talk about it all.  Felix and I still chuckle about the night we had to take Nick to Brighton A&E because he had fallen, hit the top of a radiator  and almost severed his earlobe although of course, like all those things, it wasn’t in the least funny at the time. Lucas often chats about the several times he, Felix and Nick went to the snooker semi-final at the Crucible Theatre in Sheffield which they all seemed to enjoy. And we have conversations along the lines of “Do you remember that time we were camping in France and we nearly got washed away? Nick was the only one of us who knew the French word for a spade!” And then we move, quite naturally onto something else. It’s just that Nick is allowed to be part of the conversation – often.

I have no idea whether my former colleague is still alive. Sadly, her children won’t be. If she’s still with us, no doubt she talks about them. A lot. And that’s absolutely as it should be. I’m not a relgious believer but surely this is a form of eternal life?

Today (21 September) is World Alzheimer’s Day. If you haven’t yet supported my book about Nick’s pathway through this ghastly illness then now might be a good moment? To mark World Alzheimer’s Month, there’s a 20% discount code on pledges under £100. It is ALZ20 Link: http://unbound.com/books/alxheimers-diaries 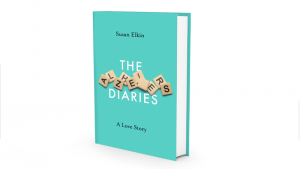