Hello Again continues at the Union Theatre, London until 21 September 2019.

This show is effectively a rather bitty song cycle featuring ten scenes in which ten performers explore coupledom in various combinations.

Inspired (or something) by the play La Ronde by Arthur Schnitzler, Michael John LaChiusa’s songs and situations invite us – I think, although it’s far from clear – to see contrasts and parallels.

Moments include two gay men making love aboard the sinking Titanic, a soldier succumbing to a prostitute in 1900 and an actress with a senator in 1995. It contrives to cover the whole of the 20th century …

Read the rest of this review at: https://musicaltheatrereview.com/hello-again-union-theatre/ 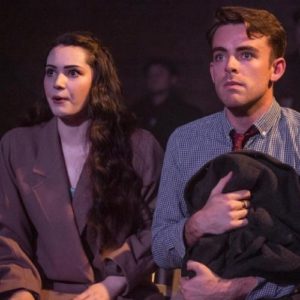