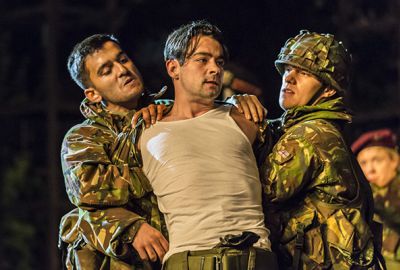 Taiko style rhythmic drumming, dazzling lights and line fighting in silhouette make for battle scenes as effective as I’ve ever seen them staged. Add to that soldiers running round the auditorium and the siege of Harfleur encompassing the entire space immersively and you’re in a pretty memorable Henry V.

We start with the full cast on stage in mufti – it’s modern dress anyway – being introduced by Charlotte Cornwell as a warm voiced chorus who wanders round the stage like a casting director before eventually presenting the crown to Michelle Terry. Cornwell then sits at the edge of the stage throughout the show, watching attentively director-style, stepping in and out of the action to drop in those familiar choruses, some of the most evocatative and colourful poetry Shakespeare ever wrote. Here, although they’re sometimes subdivided into shorter interjections, they’re given pretty straight. Cornwell simply allows the verse to work its descriptive magic – especially after the interval when real life dusk is setting in, soldiers have fires in the corners and we’re led to think about the sounds, fears and the need for “a little touch of Harry in the night” before Agincourt.

This show has been cast gender-blind but mostly the sexes of the characters haven’t changed although Joy Richardson gives us modern take on a female Bishop of Ely. Thus Mountjoy the herald is interestingly played by Jessica Regan as a man and Ben Wiggins plays a very feminine Katharine wittily while Catrin Aaron plays a feisty Fluellen.

Michelle Terry is physically very small and it requires a certain suspension of disbelief to accept her as a forceful, charismatic king although she certainly offers an interesting interpretation. At the beginning, during the Archbishop’s Sir Humphry-style attempts to manipulate him, Terry’s boyish, nervous, troubled, out of his depth young king works his fingers nervously. She allows him to get really angry on receiving the Dauphin’s tennis balls and thereafter presents a king growing visibly into leadership. She finds plenty of tension before the battle too in a king who is trying desperately to appear confident while privately beset by fears and worries. And when she gets to the wooing scene at the end of the play, Terry is gruff, mannish, absurd and funny.

In general, under Robert Hastie’s intelligent direction, this is a pretty “clean” crisp take on Henry V which concentrates on linear story telling. All the sub plots – the offstage death of Falstaff, the full treatment of the three conspirators, the feud between Fluellen and Pistol – are gone. At the same time the words are delivered with crystalline clarity so that the narrative is driven home firmly. The young woman sitting next to me who muttered to her companion before the show started that she was apprehensive about seeing a Shakespeare play which was new to her, really couldn’t have had any difficulty following what was going on. And that is probably the most important thing of all. Shakespeare can be played without gimmicks but with imagination and be totally – and enjoyably – comprehensible.