Well our life has suddenly changed gear and I have no idea whether it’s temporary, or in any sense, permanent.

My Loved one is in hospital and my feelings ricochet continually  from liberated to miserable, from relieved to worried and from pragmatic to guilty. So when I’m asked (about every five minutes on average) how I am there isn’t really an answer which tells the whole truth.

What happened to trigger this new phase? His mobility levels have declined dramatically in the last couple of weeks so the final night before the expected arrival of the downstairs hospital bed, I padded him up securely and settled him on the sofa for the night. It worked fine except that in the morning he couldn’t stand up or balance at all. With the assistance of a carpet fitter and a physiotherapist, both of whom happened to be in the house that morning, we eventually got him back onto the sofa from the floor he’d slithered to. Then it was an ambulance, paramedics and Lewisham hospital where he’s now been for a week.

He’s on a bright, airy, quiet, medical ward and being looked after well. Earlier this week I persuaded a staff nurse to shave him and trim his moustache – all done willingly with cheerful good humour. And he’s seen a neurologist, a speech therapist, physio and lots more. Basically they are waiting to transfer him to a “Care of the Elderly” ( I suppose that perfectly decent, Greek-derived word “geriatric” is no longer PC) ward for a full assessment but at present there isn’t a bed. Every medical pro who sees him is mystified by the rapid deterioration because this is not typical of Alzheimer’s. So they are gradually concluding that there are other illnesses in the mix including, maybe Parkinson’s or Parkinsonism. Life is bloody unfair, isn’t it?

I, of course, am not surprised by any of this. I live with him (or did until last week) and have been saying for months most of what they’re now saying.  I can’t tell medics their job but –  curious, information seeking journalist that I am –  I first mentioned “dementia with Lewy Bodies” eight months ago in November. Now they’re all talking about it. Frankly, I don’t now think it matters what you call it. He is very ill and we have to manage the situation as it is. The medics are muttering about trying Parkinson’s medication very cautiously with an escalating dosage but there are potential problems with drugs not agreeing with each other or causing dangerous side effects so I’m really not sure whether it’s a good idea or not.

So how is he in himself? Very sleepy and rarely with us. He sometimes knows who I am and can tell me my name but don’t bank on it. In A&E last week he told a doctor that our eldest son was “my daddy” a word I have never heard him use in nearly 60 years of knowing him. He must have slid back, at that moment, to about age 8. Most of the time now he mutters incoherently and very softly – evidently trying to communicate something but we have no idea what. At the time of writing he hasn’t been out of bed since he left home. Nurses clean and feed him. His condition has declined even since he’s been in hospital.  Quality of life? None.

So what happens now? Well I think he’ll be in hospital some time while they attempt to sort out medication. Then there’s a suggestion that he might go to a “ neuro-degenerative rehabilitation centre” (note the contradiction in terms) for a bit before coming home to the awaiting hospital bed with a home nursing plan. I wonder? Given the speed at which he’s going down …

Back at base I’m trying to adjust my mindset. For example I need food quantities for someone living alone. I did a single person’s supermarket shop at the weekend and spent, amazingly, only £22. I’ve also put all the illness gear – packets of pants, plastic bags, wipes, special cutlery etc way out of sight. I can get it out again easily enough later if the situation changes. Or not. But at least the house looks more like home.

And I have to be honest (because that’s the way I am). It is actually easier to live and work with him safe in hospital than it is when I’m constantly worrying about where he is, what he’s doing, booking carers, rushing to get home to relieve them and all the rest of it. It’s lot cheaper too and I’m less tired. But as silver linings go it’s pretty ragged. I visit every day and tell him over and over that I love him. Not much more I can do, really.

Photograph: (Above) Chicago in 2012. (Below) Beach in Monterey Bay, California where we were fascinated to watched vultures feeding on a carcass in 2013. How well, alert and happy he looks!   I’ve decided it would be tasteless to publish photographs of him lying, helpless, in Lewisham Hospital. 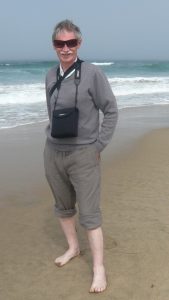