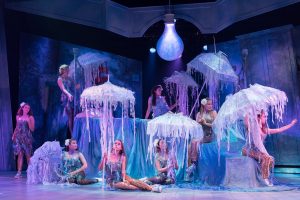 Annus horribilis it may have been but 2016 has been a good year for youth theatre. There’s been some interesting work by actors in training too.

In the last couple of weeks, for example I have been blown away several times by the sheer talent of some very young performers. The Wind in the Willows at Rose, Kingston, for instance uses a large – impeccably directed by Ciaran  McConville –  ensemble cast of animals who work with five professional adults in the lead roles. It’s sparky and moving partly because of the nature of the piece but also because it’s so encouraging, exciting even, to see young people (some very young) being confident, competent, entertaining and clearly enjoying themselves. Doris the Dormouse’s performance, among many others, will stay with me for some time.

And what about Dale Rooks’s splendid Peter Pan at Chichester? The entire cast, and it’s all on a very large scale, is recruited from CFT’s 800-strong youth theatre and every single youngster is a credit to the people who teach, develop and direct them. What’s more – as I told the friend who accompanied me, on the way home – such is the transformational power of drama that many of those young people will be confidently achieving more in other areas of their lives too. Said friend, incidentally, has been an ex-pat in Italy for 40 years and came to Peter Pan with no real concept of what youth theatre is. Well, she has now and to say she is impressed would be an understatement. Pity she wasn’t in the country when I saw the glitteringly good National Youth Theatre 60th anniversary gala show in September.

I’ve also seen some impressive drama school shows this year, I made a decision last January that I would make an effort to get to more of these now that (long story) I no longer routinely review graduate showcases. The ones which stand out particularly are Arts Ed with Beauty and the Beast in the spring, Old Vic Theatre School with a powerful King Lear (student cast with Timothy West, Stephanie Cole and David Hargreaves so it was an ongoing masterclass) in the summer and three contrasting shows from the National Youth Theatre rep company at Ambassadors Theatre in September and November. Golly, does NYT know how to make ensemble work to outstanding theatrical effect.

So there’s been masses to see, enjoy and admire. That’s why I get unashamedly furious with people who write off such shows as “only” children or students and therefore not worth bothering with unless you have a relative in the cast. As theatre they are as valid as any other form. Good theatre is inclusive. The standard is often astonishingly high and it’s terrifically satisfying to see young people doing well. Moreover tickets are typically much cheaper than for many an indifferent west end or “professional” show so what’s not to like?

Happy Christmas one and all.