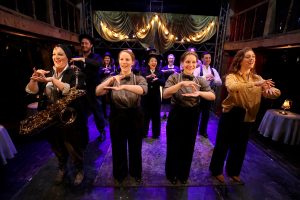 Twelfth Night at The Watermill Theatre. Members of the cast with Lixi Chivas and Ana Becker. Photo by Philip Tull

Last week I went to the Watermill at Newbury. It was my first visit and I was bowled over by the sheer beauty of the place. What  a treat! I’m now really looking forward to going back there for a performance in June.

The purpose of my visit was very specific. The forthcoming production of A Midsummer Night’s Dream directed by Paul Hart, and building on the success of last year’s Twelfth Night, is to have integrated signing at some performances. I’d been invited to drop in on rehearsals to see sign performer Lixi Chivas working with, and alongside, the cast of ten talented actor-musicians.

It was fascinating to watch. Lixi was at the heart of the action signing as much with her face and body and her hands as she interpreted the words in the scene at the end of Act IV when the mechanicals are initially disconsolate because Bottom has disappeared. Then there’s huge excitement when she (Victoria Blunt – who’s going to be outstanding in this role) reappears.

Even while the director is speaking Lixi is usually signing to assist Sophie Stone, the deaf actor who’s playing Herma, interestingly, presented as if she were a deaf character. “It means” Lixi explained to me when they broke for lunch, “that the other three lovers can, for example, cut her out of the conversation by turning away from her during the quarrel – it creates a different dynamic between them”.

Lixi was also open to creating bits of stage business with cast members so that she joins them rather than being any sort of “add-on”. She was soon holding hands and exchanging glances with Emma McDonald’s sexy charismatic Hippolyta, for example.

When Lixi chatted to me during a three minute break immediately after my arrival, Sophie was present too so Lixi was speaking to me and signing simultaneously in order to keep Sophie in the conversation. It’s very impressive on several levels – first I’m stunned by Lixi’s acting, choreographic and communication skills and second it’s very refreshing to see inclusivity working so well that it’s a non-event. Moreover Lixi seems to have learned the entire play which is more than is ever required of any mainstream actor.

After a while they moved on to the next scene which starts with Hippolyta and Theseus trying to make sense of the concept of a shared dream and then includes the four lovers. “Shall I sign to Sophie at that point?” suggests Tyrone Huntley, who’s playing Lysander, as ideas gradually gel.

In the signed performances of this show there will be two interpreters integrated into the action. Lixi will be joined, as for Twelfth Night, by Ana Becker.

Lixi’s role at the Watermill is an unusual one. The theatre has funding from the Greenham Trust, a charity fomed with the residual assets of the Greenham Common movement, to employ Lexi part time for three years. That three year tenure, which is just ending, has enabled Lixi and the Watermill to set up a number of very worthwhile  community inclusivity projects.

The excellent news is that Greenham Trust has now committed for a further three years so that the work can continue.

A Midsummer Night’s Dream runs at The Watermill Theatre from 10 May to 16 June. BSL integrated performances are on 13 and 16 June.