SUSAN ELKIN is enchanted by the multi-faceted and prolific writer Adèle Geras, still writing – at her own pace – at the age of 72.

Most interviewees elect to meet journalists on neutral territory such as a coffee shop, hotel or reserved space at a theatre or publisher’s. It is typical of the warmth and openness of novelist Adèle Geras that she invited me to lunch at her pretty home on the outskirts of Cambridge and plied me with a delicious homemade middle eastern salad.

Adèle has written dozens of books for children and young adults including Troy (published in 2000) which brings to life the women mentioned only peripherally in The Iliad and made it onto several book prize shortlists. In recent years she has also turned her hand to novels for adults. Her latest Love, or Nearest Offer is published by Quercus this month and is about an estate agent managing house moves and life changes for several people whose lives interact. Its flavour sits somewhere between Joanna Trollope, who eschews happy endings, and Katie Fforde who finds them irresistible.

Describing herself as a very secular Jew, Adèle tells me about her complicated cosmopolitan background, “I was born in Jerusalem in 1944” she says, adding that her mother’s family had lived there for seven generations. “My father was half English and half Moroccan because my grandfather was a merchant whose work took him to Morocco. “My father, who worked desperately hard at being more English than the Queen read law at Oxford and then his work took him to Jerusalem where he met my mother.”

Adèle grew up mostly in Egypt but was sent to boarding school in England when she was eleven after her father had joined the British Colonial Service and was variously posted all over the world. “I had passionate, dedicated teachers at Roedean where the notion that there was anything girls couldn’t do never entered anyone’s head. I am deeply grateful for my education.”

Having grown up in an environment in which nearly everyone spoke more than one language and trilingualism was the norm, it seemed a natural progression for Adèle to do modern languages – French and Spanish – at Oxford. “Although it wasn’t what I really wanted to do. I was determined to be an actress and wanted to go to RADA, but I promised my father I’d try applying for Oxbridge first. Actually, even before I got there, I’d realised that there was so much drama to take part in at Oxford that it was almost as good as vocational training anyway.”

She was neither the first nor the last Oxford undergraduate to spend so much time acting that her studies suffered. “Our play Hang Down Your Head and Die” went to the West End and got terrific reviews. I had prelims at the time so I was in exams all day and the theatre all evening before climbing back into St Hilda’s college in the early hours. The upshot, of course, was that I failed my prelims which was a dreadful disgrace”. She mentions other plays and other memories and points out how lucky she was to be at Oxford from 1963-1966 alongside Michael Palin, Diana Quick, playwright David Wood and many more.

In her final year at Oxford she hooked up with postgraduate student Norman Geras whom she married when she was 23. “Norm’s entire career was at the University of Manchester, first in a junior capacity and eventually as Professor of Government so that’s where we lived until he retired in 2003 – soon after his cancer was diagnosed” says Adèle who has two daughters, one of whom is the best selling novelist Sophie Hannah, and four grandchildren. Norm died in 2013 having become quite well known for his cutting edge Normblog on which he wrote about politics, philosophy, cricket, country music and the many other things which interested him.

So how did Adèle start writing? “I worked as a French teacher in grammar school because I couldn’t get acting jobs and we were skint. Then once I’d got Sophie we used to go to the library every day and like many parents I began to think ‘I could do better than this.”

So she entered a newspaper competition with misplaced confidence although it proved that she could get a story down on paper. Then, undaunted. she had over 40 rejections for books for very young children before she realised that these are almost impossible to sell without illustrations. Eventually she hooked up with Doreen Caldwell and together they did Tea at Mrs Manderby’s, for the Hamish Hamilton Gazelle series – having literally knocked on the door of many London publishers to show them their work. “Publishers and editors were so nice in those days” says Adèle. “I feel really sorry for young writers trying to get started today now that everything is so commercially driven and hard bitten”.

Many picture books and books for older readers followed. Adèle is an eclectic writer with many interests. She loves, for example, fabrics and is an accomplished designer knitter. Although she has now almost stopped writing children’s books since Dido in 2009 she has recently had published an exquisite miniature book – ideal for tiny hands – called The Dream Quilt (Long Barn Books) illustrated by Valerie Greeley who is herself a quilter. It tells the story of a child’s bedtime stories, dreams and imaginings.

About fifteen years ago Adèle, while in the midst of writing Ithaka with a contract and a deadline, suddenly had an idea. “And that doesn’t happen often” she says modestly. So she jotted down a couple of paragraphs about family members coming together in a house and continued to mull. Then she happened to be in her daughter Sophie Hannah’s house when Sophie’s agent rang. Naturally she asked after Adèle and on hearing that Adèle had an idea for an adult novel asked to see it. Having cleared it with her own agent, who specialises in children’s books, Adèle eventually – despite the nagging demands of Ithaka – drafted some samples which became part of a bidding war between publishers. “I ended up with a huge, really huge, advance and promises of film rights and so on. Of course it was lovely to have the money but I knew that Facing the Light would never earn that advance and I was right. So of course I get a smaller advance, but still respectable, for Hester’s Story and today advances are really modest.”

Adèle’s adult novels focus on family relationships and there are always interesting backstories which often pack quite a surprise. Her plots are not predictable. After the first two novels (there are six so far) Adèle moved from Orion to Quercus when her editor moved.

I ask her how she organises her working day. “Gently” she laughs. “If I have a book on the go I reckon to do about two hours a day, often from 5-7pm. That produces around 1000 to 1500 words a day and it builds up quite steadily if you stick at it. But I work at my own pace and I don’t have fixed deadlines. I take the view that at 72 I could be completely retired so any work I achieve is a bonus.”

Otherwise she enjoys life. During the course of our conversation she mentions attending knitting workshops at John Lewis in the city centre, leading the occasional writing workshop, writing a “quick read” book aimed at people such as prisoners who may be reluctant to tackle anything too long, enjoying music and television, running her website History Girls, spending time with her many writer friends and with family and, of course, reading a lot. She mentions so many writers and books as we chat that by the time I leave my TBR (“To Be Read”) list is nearly as long as hers.

Beneath her kind, appealing and faintly scatty manner, Adèle is of course a serious thinker who has an opinion about everything. Her views are generally liberal but rigorous. She has, for example, disconcerted her friends by expressing admiration for Michael Gove’s attempts to raise standards in education and more recently to improve conditions for prisoners by, for example, granting them more access to books.’

I leave Adèle’s house feeling quite sad that this interview is over. In three hours we have ranged over many topics, ideas and views. I drive away with my head brimming over with colourful impressions from her childhood in the middle east to treading the boards in Oxford, London and Edinburgh. Or the image of her chatting to the eponymous Hamish Hamilton and being disappointed when he gave her a book instead of the promised three Pound fee at a time when she desperately needed tights. Then there is the time she did a book signing session alongside Sophie Hannah because the image of mother and daughter together is novel. Yes, the word “multi-faceted” might have been coined for Adèle Geras.

This interview was first published in Ink Pellet 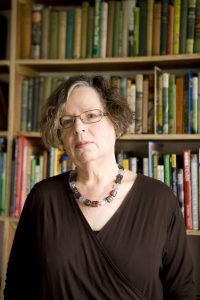