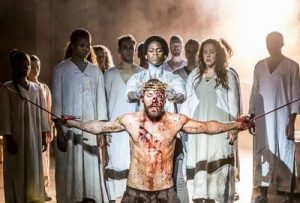 Standing ovations, which should be reserved only for things which are outstanding and extraordinary, are given much too readily these days in my opinion. But nothing could have stopped me from leaping to my feet in sheer pleasure and excitement at of the end of this astonishing piece of theatre – probably the best thing I’ve ever seen at Open Air Theatre, Regents Park and there’s been plenty of good work to choose from over the years.

From the moment the first guitar begins to twang at the opening of the overture you are on the edge of your seat. And it’s an inspired idea to position the band in two groups fifteen feet or so above the action framed at the top of the two rusty scaffold-like blocks which form the base of Tom Scutt’s set. It means that you can see the instrumentalists playing the colourful orchestration which characterises Andrew Lloyd Webber’s remarkable score. I’m first and foremost a classical music person but have come to the conclusion, since I first saw Jesus Christ Superstar several times n the 1970s, that this piece – every inch a fully fledged opera – is as great in its way as Don Giovanni or La Boheme.

And it works, of course, partly because the narrative is so powerful and in this case the cast, director and sound engineer ensure that we hear every single word and that’s rare. The central tension between Judas (Tyrone Huntley) driven initially by a sort of reasoned common sense and eventually destroyed by guilt and the passive, troubled Jesus (Declan Bennett) is impeccably directed. Timothy Sheader has excelled himself. The moment when Judas and Jesus confront each other in a troubled, edgy syncopated 5/4 time interspersed with the apostles’ conventional maudlin hymn-like chorus is nicely pointed up too.

And in the second half – dusk evocatively falling (even more than it should have been because the show went up nearly half an hour late on press night thanks to a technical issue) – Bennett, dripping with blood, quivers and twitches in agony and anguish, His light tenor singing voice is suitably gentle, occasionally cracking into falsetto, or becoming ragged with pain. His control is very impressive.

Other high spots – and they come thick and fast – include the contrast between Bennett’s mild voice and the gravelly basso profundo of Cavin Cornwall’s dangerously charismatic Caiaphas. King Herod’s Presley-style number is a famous set piece show stopper and Peter Caulfield squeezes every possible drop of outrageous humour out of it. Anoushka Lucas’s Mary sings the well known lyrical numbers with moving warmth and Phil King, an actor musician like Bennett, is strong as Simon Zealotes especially during the denial.

Plenty of hugely enjoyable individual performances then, but what really makes this show special is the quality of the pulsing, vibrant, relentlessly energetic ensemble work. Drew McOnie’s very original choreography creates a visual narrative so that there’s an ongoing, mostly high speed, dance drama which complements the feelings being expressed in words. They leap, sweep their limbs in arcs, drum their feet in magical unison. It is tremendously exciting to watch.
Bravo to everyone who has worked on or is involved with this magnificent show. I predict that the run in the park is just the beginning of its life, I shall be surprised if it doesn’t both transfer into the West End and tour.