Joan of Arc: Under the influence (Daft Essays 3) 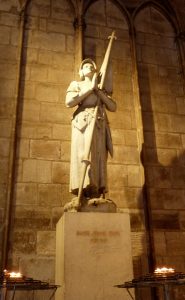 A COLD START AND A HOT END

La Belle France is at war with herself. Shooting herself in la pied, you could say. Two branches of the royal family are at loggerheads.  In one corner is The Duke of Burgundy. He wants to sell out to England which is in predatory mood, champing at the bit to get across what Shakespeare called ‘the narrow seas’ to conquer France.

On the other side are Count Bernard VII of Armagnac and his mate Duke Charles of Orleans. Duke Charles reckons that another Charles – Charles of Ponthieu, last heir of the ruling Valois dynasty, should be king, not that arrogant upstart  with the funny haircut, Henry V of England.  So of course he doesn’t see eye to eye with Burgundy.

That’s a potted version of the big picture.

Cut to the little picture at Domremy.  We’re inside a flimsy, drafty wooden hut. A humble shepherd’s wife named  Isabelle d’Arc is straining in childbirth – no anaesthetic, hospitals or mod cons in those days.  But she’s doing OK. Then hey presto, and against all the unhygienic odds Madame d’Arc pops out a bouncy daughter.

It’s a happy moment but it’s just as well that that weary Isabelle and her delighted husband Jacquescan’t foresee the trouble and heartbreak that this little miss is soon going to cause them.

Who should be king?

Before la petite Jeanne – Joan to you and me – is out of diapers King Henry Fifth of England has stormed France and wiped the floor with the  faction-ridden French army at the battle of Agincourt in 1415. He’s back two years later to grab  a lot more French territory.   By 1420 Henry has done a deal with the wily, eye-to-the-main-chance Duke of Burgundy.  Henry and his descendants will be kings of France after the death of Charles VI. Henry and Charles VI’s daughter Katherine are spliced to seal the deal.

Little Joan meanwhile is growing up fast back home in the sheep-full Barrois region of what is now Lorraine.  She’s pretty clever and a bit precocious. She knows what’s going on around her. But she doesn’t like it. So Mademoiselle d’Arc asks lots of awkward questions and soon comes to the conclusion that as far as she’s concerned there’s no contest. Charles of Ponthieu should be king.

By the time she’s 12 she’s under the influence of visions and voices in her head. Two early Christian martyrs, St Catherine and St Margaret, are busy telling Joan what’s what. And St Michael the Archangel – Biblically famous for commanding heaven’s armies against Satan no less – often chips in too.

‘Go see the local commander at Vaucoleurs and get him to take you to the royal court for a chat with Duke Charles,’ the saintly trio instruct her.  At age 14 in 1428 she obeys. But it’s a while before anyone takes any notice of this earnest, illiterate peasant girl and her visions.

Then Charles finds himself in dire straits. He keeps losing battles, he’s got no money, he’s rapidly being driven back by his enemies. You could say he’s kind of desperate.  On her third attempt Joanie, dressed for the occasion in men’s clothes gets through – the unlikely answer to a beleaguered military leader’s prayers.  In the US today she’d be a ninth grader.

There’s something about Joanie’s tales of voices and visions that convinces Charles (well, he hasn’t much to lose) and he puts her in charge of fighting the English.  Joan d’Arc has, miraculously, a natural gift for human resource management. So she gets on and wins lots of battles, including the famous battle of Orleans in 1425. After that they called her the ‘Maid of Orleans.’

She didn’t need a life coach

Had she lived in our own times, and someone taught her to read and write, young Jeanne could obviously have knocked off a few best selling management text books – She could have thanked Saints Catherine, Margaret and Michael in the acknowledgements.

As it is, she reforms the troops by expelling the hookers from the camp. She insists that her soldiers go the church and attend confession. The men under 15 year old Miss d’Arc’s command are also required to give up swearing and to refrain from looting or harassing the civilian population.  Some little dame, this Joan.

But it can’t last and a hot, painful death awaits her at Rouen.  By 1429 Burgundy has more or less kicked the Armangac /Orleans faction out of the ring and is wheeling and dealing with the English right, left and centre. Joan is taken prisoner by the Burgundians and handed over to the English (in exchange for the mediaval equivalent of megabucks). They try her for heresy.

‘Your voices are demons. You are possessed by devils,’ her accusers say.  Have they forgotten that these voices always told Joan to go to church and to hang on tightly to her virginity?  Wise counsellors, saints. Poor Joan is also charged with cross – dressing and that’s heretical too.

So, still under the influence, she meets a fiery end when they tie her to a stake and light the fire beneath her on 30 May 1431. She’s nineteen and a half.

There’s a postscript to this sad tale of what listening to saints can do for you.  In 1920 on May 16, nearly five centuries after her death, Joan of Arc was canonised as a saint by Pope Benedict XV.  A case of if you can’t beat them join them?