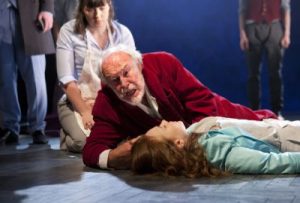 Bristol Old Vic, currently undergoing major renovations so that getting into the auditorium is a subterranean adventure, is celebrating 250 years as a working theatre. Bristol Old Vic Theatre School is 70 this year and of course it originated at the theatre although it has long since been a completely separate organisation. The two are now collaborating again and this fine King Lear, directed by BOV’s artistic director Tom Morris, is a shared venture to commemorate both landmark anniversaries.

Three top-of-the-game actors work with a large cast of BOVTS students and mentored creatives. That means that actors get a masterclass at every rehearsal though working with Timothy West, Stephanie Cole and David Hargreaves. It also means some imaginative designs such as animal masks for the chorus of cast members who provide chorally sung atmospheric sound effects with rhythmic stamping and sand drums and so on for the storm. And there’s an absolutely delightful massive chandelier made of antlers. The piece is in modern dress but the ambience is timeless.

The West/Cole partnership as Lear and his fool is genius casting. The pair have clearly been together for a long time. They pat each other’s hands, share private jokes and establish a comfortable rapport which is almost spousal as Cole stomps about in her oversized coat and eccentric hat.

West is a very fine Lear, clearly showing signs of alarming volatility – “full of changes” as Goneril observes – from the very first scene in which he shifts from amiable authority to deranged irrational anger. And suffering from an “abatement of kindness” he has a way of bringing out the most poignant of lines. He is terrific in the storm scene, especially with Tom Byrne as Edgar pretending to be Poor Tom. Byrne, incidentally, makes a good fist of a very challenging role because Edgar is so rarely himself. At the last when West staggers in with Poppy Pedder (strong, particularly in the reconciliation scene) as the dead Cordelia in his arms his final lines are devastatingly moving. Both my “plus one” and I were weeping as the lights finally went down.

Hargreaves gives us a very plausible, gullible but decent Gloucester and the eye gouging is, inevitably, appalling. Dylan Wood as the amoral Edmund, plays him as a sardonic Scot whose direct-to-audience appeals are very convincing. He finds the right charisma to persuade us that both, yes, Goneril (Jessica Temple) and Regan (Michelle Fox) probably would both be lusting after him. Temple – who has a whiff of Jessica Findlay-Brown about her – develops real stage presence as Goneril grows grows ever more ruthless.

This is one of the best student productions I’ve seen in some time. It is clear that working alongside professionals raises the bar and it would be good to see more of this sort of thing. And why did it take this production to make me realise that actually, King Lear, is just a warning to think very carefully before granting of enduring power of attorney to your loved ones…?