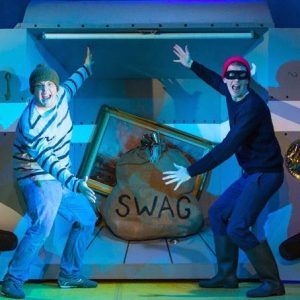 If you go a-burgling in your stripy top with your swag bag you will get caught and sent to prison. That’s the lightly presented moral message of Julia Donaldson and Lydia Monks’ immensely popular picture book for pre-schoolers.

The story also celebrates friendship and collaboration because it is the rarely seen ladybird who lurks, listens and blows the whistle on the night-time thieves.

We’re in a rather rosy farmyard, where the prize cow has just won a rosette – which is why the burglars are after her. In the hands of director Graham Hubbard and his team the drama of all this makes a fine, colourful mini-musical for very young children [extra lyrics are by Howard Jacques; the composers are Jon Fiber and Andy Shaw] …

Read the rest of this review at Musical Theatre Review http://musicaltheatrereview.com/what-the-ladybird-heard-lyric-theatre/