It’s now 19 months since Ms Alzheimers’s official arrival in our household although of course, with hindsight, I now realise she’d been hovering on the horizon for quite a while before Diagnosis Day. And I marvel at what a lot I’ve learned – the practical stuff, the theory, the trivial and the serious. Above all there’s the acquisition of new and often quite surprising, self knowledge.

And I’ve been more aware of all this than ever in the last three weeks during which Ms A has suddenly tightened her grip and we’ve seen marked deterioration. At the time of writing it’s nine days since MLO has left the house.

I have, for example, learned that:

1.I can talk about death in a calm, matter-of-fact way which I would never until now have imagined that I could. Of course, I’ve thought quite a lot in the last year or two about widowhood and how I might/will cope with it. Several times recently MLO has raised the subject of his own death so I know that he is beginning to think about the inevitable too. Gently, but truthfully, I have astonished myself with how straightforwardly we can talk about it when he raises the subject. No tears. Just honesty.

2.I have morphed into the kind of person who can march into Sainsburys (where, I’ve discovered, they’re 25% cheaper than in Boots) pick up three huge packets of incontinence pants and saunter out via the checkout without batting an eyelid.

3.Yes, I can survive and still work reasonably efficiently in the daytime even if I’m woken and have to get out of bed to help MLO half a dozen times during the night. I seem to be adjusting to getting my sleep – up to 7 or 8 hours maybe –  in one hour bursts. Moreover I can now go back to sleep almost instantly (just I did when I had babies) which I haven’t been able to do for a very long time.

4.I (we) have some fabulous friends and an amazing family (nearly) all of whom are ready to drop everything and do everything they possibly can to help me when I need it. They astonish me continually. I’ve said this several times before but it can’t actually, in my view, be said too often.

5.If you’re catering for someone who needs as much fibre as you can cram in then you can make variations on an Elkin beans on toast theme. MLO doesn’t actually like Heinz beans but he does like hummus. I’ve discovered that you can mash any sort of tinned bean with any sort of nut butter seasoned with a few herbs and a dash of, say, basalmic or soy sauce and pile it onto toast. Infinite variety. Borlotti beans with almond butter anyone?

6.I now know how to turn the TV on. I’m with Cilla Black on this one. Remember when her beloved husband Bobbie died and she couldn’t get the news on because he’d always “driven” the TV set? Everyone derided her but it was the same with us. We’ve never been in the habit of much TV and I didn’t operate it often enough to remember. Well it took several texts to and from long-suffering sons but I have now got the hang of it. I’m trying to persuade MLO to watch gardening and antiques programmes which won’t disturb or distress him because he no longer reads much and I need entertainment for him which won’t fuel his Alzheimer’s-driven, frightened imaginings about crime and violence.

7.I’m much more patient than I often give myself credit for. I find I can usually repeat the same thing several times without getting cross. I do all this crawling out in the night, mostly without grumbling. I generally manage not to rush him – although he’s painfully slow at everything he does now. I probably blow about one time in twenty. Not bad really?

8.A trivial (but tiresome) health problem of my own worsens if I allow myself to get angry or stressed. I have only recently worked out the connection. It’s a good reason for taking a deep breath and smiling rather than flipping my lid.

9.I can now write features, reviews and articles despite being repeatedly interrupted and called away. I used to be quite precious about needing, say, two hours entirely to myself to get a piece of work finished. These days MLO appears frequently: hovering in my office looking troubled, anxious or vacant. “Can you help me please?” or “Is it nearly time for ‘them’ [usually an imaginary visitation] to arrive?” or “I just wondered what you were doing?”. So I have to stop, deal with him and recover my train of thought ten minutes later. And it’s OK. Usually I can.

10.It really doesn’t matter much if he forgets I’m his wife and thinks I’m a carer. I know exactly who I am, and who he is, so that will do for both of us. I just chuckle at him when he says things like “Do you help many people like me?” because I know – at present anyway – that I shall probably get him back at some point later. Today for example he pointed to the pendant I’m wearing and beamed. “I bought you that, didn’t I?” It was only a few weeks back too, in a jeweller’s in Chichester, so that was a good moment. 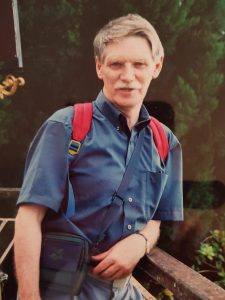 A nice memory of how things used to be. I took this photograph in Penang in (I think) 2004. Doesn’t he look well!