Kirill Gerstein’s account of Beethoven’s Third Piano Concerto was very arresting. You could see and feel him breathing the music, especially in the first movement and he makes sure you notice every flamboyant, jubilant grace note in the finale. I liked the yearning intensity he brought to the beginning of the largo too, going on to play it with so much rubato that it sounded in places almost like a smoochy jazz arrangement. I was not surprised to read later in the programme that Gerstein originally trained partly in jazz piano before deciding to specialise in classical. 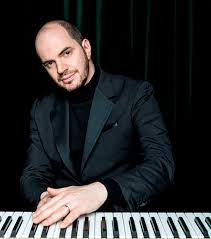 Gerstein – who looks more like a nightclub bouncer than a stereotypical virtuoso pianist – has a palpable rapport with Mark Elder on the podium and brings an intimate chamber music quality to the work as he leans round sensitively to look at the string principals. There was some splendid work from the orchestra throughout the concerto too. The impressively played bassoon and flute duet in the largo was a high spot, for example.

Then we nipped forward a century and went from a work I have heard performed many dozens of times (and twice played the second violin part in) to one I had never before heard played live: Charles Ives’ Second Symphony written in the early years of the 20th century but not performed until Bernstein finally premiered it in 1951. As Elder observed in his illustrated introduction after the interval, Ives followed the advice of Dvorak in America ten years earlier, that American composers should exploit their own heritage rather than slavishly emulating Europe. The piece is so referential – hymns, band tunes, square dance music, popular tunes and more – that it’s almost more of a sectional medley than a symphony but the imaginative scoring and orchestration must mean it’s fun to play and it’s certainly engaging to listen to.

Elder brought out all the beauty in the central cantabile and I admired the warm richness of the string sound in the third movement. First violins did well with the square dance theme and getting the two trombonists on their feet to play the big, overstated tune at the end was an inspired musical joke like the cacophonous final chord – the traditional way a dance band indicates that the party’s over.

An interestingly programmed concert of contrasts from the LSO in good form.