Lots of new books to read

Is one of your new year resolutions to read more books about whatever aspect of the theatre industry you’re involved in or want to be? If not, then perhaps it should be. Whatever your specialism then there’s probably something recently published awaiting you.

If you want to bone up on the history of drama, for  example, then try Gary Day’s very readable The Story of Drama (Bloomsbury) which examines drama and how it has developed from the Greeks to the 21st century mostly through the themes of tragedy, comedy and sacrifice.

Or perhaps you want practical advice about acting. Amanda Brennan’s The Energetic Performer (Singing Dragon) is useful. She teachers at Royal Central School of Speech and Drama and her book focuses on the use of the body to create performance. Feldenkrais for Actors by Victoria Worsley (NHB) is also strong on movement and using the Feldenkrais approach to it, Worsley teaches at various drama schools and at The Actors’ Centre in London.

Still on how-to books for actors, Mastering the Shakespeare Audition by Donna Soto-Morettini is a handbook for actors of all ages and levels of experience who have to start preparing a Shakespeare audition speech and are in need of practical help. And when you’ve done that read Harriet Walter’s Brutus and Other Heroines for inspiring insights into playing Shakespeare from an actor at the very top of her game.

Then there are books about other aspects of theatre making such as two new editions of books by award-winning playwright Rib Davis. Writing Dialogue for Scripts and Creating Compelling Characters for Film, TV, Theatre and Radio are both published by Bloomsbury and contain much useful advice for budding script writers from all points of view. If, on the other hand it’s theatre music you want to write then try Writing Music for the Stage by Michael Bruce (NHB). It covers the whole show from working out when music might add something through to booking and working with musicians – all very practical and useful. There’s a lot of hand-on advice along with some thoughtful theory in The Art and Practice of Directing for Theatre by Paul B Crook,  too (Routledge). And there’s still more theory likely to help people working on theatre academically and trying to place it in context in the third edition of Mark Fortier’s Theory/Theatre (Routledge).

Also new from Routledge are three new large format immaculately illustrated practical books relating to back stage skills and crafts. The Art and Practice of Costume Design is a series of enlightening essays edited by Melissa L Merz. Concert Lighting by James L Moody and Paul Dexter is subtitled  “the art and business of entertainment lighting” and takes the reader through every aspect of the subject. Stage Management Basics by Emily Roth, Jonathan Allender-Zivic and Katy McGlaughlin is a primer which introduces the student/reader to a complex function in a commendably simple step-by-step format.

Are you a director in search of more interesting drama games to use in your rehearsals? Jessica Swale’s Drama Games for Rehearsals (NHB) is her latest contribution and like her earlier book Drama Games for Devising there is no shortage of strong ideas likely to be fun to use. New in the same series is Drama Games for Young Children by Katherine Zachest – a real gift for any primary school teacher or an actor who teaches children part-time. 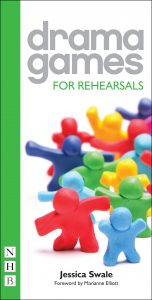 Lastly maybe you need, or want, to learn about theatre companies or venues and their history and achievements.  Forest Fringe: the first ten years (Oberon Books) describes and examines a decade of performance at a cutting-edge Edinburgh venue. Steppenwolf Theatre Company of Chicago by John Mayer (Bloomsbury) traces a famous innovative company from its founding in 1974 to the present day. John Bull’s British Theatre Companies (Bloomsbury) is a detailed, well researched history of what has happened in the industry in the last half century and is good on social and political influences.

If you read them all these books will probably see you through the whole of 2017. Happy learning!