Lots of writing careers in theatre

Why aren’t we telling young people about the writing and writing-related careers which drive our industry? Careers advisers working in secondary schools are notoriously weak and negative about performing arts careers largely because most of them can’t see beyond acting. Even the few who conscientiously try to be informative about backstage careers rarely get beyond stage management, lighting and sound.

Plays have to be written, translated, reworked in new versions, abridged and re-imagined. Song lyrics and books for musicals don’t write themselves either. Simon Stephens, whose book A Working Diary (Bloomsbury) was published in 2016 in advance of  told me at the time that he tries to get into a school or college once a week to talk to young people about play writing. Stephens is evangelical about this because he grew up not understanding that you could actually make a living as a playwright.  Sadly there’s only one of him and indefatigable as he is he can’t cover more than 50 or so schools a year out of the UK’s 5,000 or so secondary schools.

We should be telling these eager young people about the career opportunities of literary agents too – the people who stand quietly behind the names, ensuring that business goes smoothly and that everyone can pay his or her bills.  Nearly every successful playwright has an agent who makes sure that the plays get to the right people and that contacts are mutually acceptable, among other things.

The key thing to tell youngsters is that literary agents who specialise in plays, as opposed to novels and other written forms, is that they are both passionate and knowledgeable about drama. They know a good, marketable play when they read one. Often there’s an English or drama degree in the CV along with a great deal of theatre exposure.

Big companies have literary departments too. Someone has to read plays, assess their worth and make recommendations. Sometimes there are quite junior posts in these departments – a sort of first filter because large numbers of plays are submitted all the time, often by agents although companies often discourage unsolicited scripts.

And for goodness sake let’s enthusiastically and proactively make them aware of other writing roles connected with theatre. Someone has to write and produce programmes which can effectively be informative magazines in big companies. In a small company it might be job seven on some Woman or Man Friday’s list, but in a large organisation such as Royal Opera House or The Globe a discrete department commissions freelancers to do interviews and write essays relating to the play. It’s a form of publishing.

And while on the subject of publishing there are occasional jobs to be had in the small specialist book publishers whose output is devoted to performing arts. I wonder how many stage struck school leavers have actually heard of Nick Hern Books, Oberon Books or Samuel French? It doesn’t have to be a small publisher either. Methuen Drama is an imprint of publishing giant, Bloomsbury.

Then there’s performing arts journalism. Yes, we all know the print industry has shrunk in recent year and that a number of well known critics have lost their jobs but just that doesn’t mean there are none at all. Mark Fisher’s excellent 2015 book How to Write About Theatre: A Manual for Critics, Students and Bloggers (Bloomsbury) should be in every school library, if only to draw students’ attention to the fact that writing about theatre is a valid activity and one which could, perhaps, eventually develop into a career.

So that’s the first message and I hope careers advisers are listening. You can earn money from writing – in many different ways – within the performing arts industries.

Second, it’s time we started stressing the value of portfolio careers. Few writers just write. Playwrights often direct. Actors write columns. Journalists sometimes teach. Successful people tend to be role-jugglers.  Even Alan Bennett publishes memoirs as well as plays.  The reality of 21st century life in general but, especially in this precarious industry, is that it is not sensible to put all your eggs in one basket. 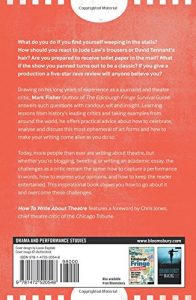