A slightly less populist concert than MSO often presents, we began with Kodaly’s Dances of Galanta. Brian Wright observed in his introduction that the concert’s three works all have folk themes and origins. That was very clear in the opener which the orchestra played, after a rather exposed shaky start, with rich vibrancy. The fast and furious string work and the flute solos were especially noteworthy. 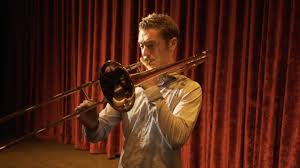 Gordon Jacobs’s 1955 trombone concerto may not be a great work (somewhere between Eric Coates and Vaughan-Williams on an off day with an awful lot of predictable arpeggios) but it’s a rare treat to see the trombone take centre stage. It was also delightful to see the grown up Peter Moore back in Maidstone to play it. In 2008 he was the youngest ever winner of the BBC Young Musician of the Year and played with MSO soon after. Still looking barely old enough to have left school, Moore found lyrical clarity in every note during a thoughtful performance which demanded to be listened to very attentively.  And the Sarabande by Bach which he played as an encore was stunningly beautiful.

And so to a Mahler marathon. His long first symphony is very demanding and it was played here with unflagging energy. Personally I’ve always found the opening indecisive, disparate and wishy-washy with its cuckoo-ing woodwind and offstage brass but Wright held it together competently. There was some elegant playing in the second movement including nice string glissandi in the trio.

The third movement is, of course, one of Mahler’s best. Jasmine Otaki played the double bass solo – the memorable minor key Frere Jacques theme which dominates the movement – with real mystery. We heard MSO at its best here, as other instruments and sections gradually picked up the theme and intensified the texture. The contrasting Klezmer-like section led by the brass with percussive col legno from the violins was excellent too.

The final movement is momentously manic in nature and calls for much intensity. That is not to say it should let rip and in places this performance sounded less controlled than it needs to be although I really liked the grandiloquence achieved by the brass section.

It’s a symphony which batters its listeners and demands enormous stamina from its players. No wonder Brian Wright looked exhausted at the end.