There are few more atmospheric pieces than Britten’s Four Sea Interludes from Peter Grimes. It only needs a bar or two of those ethereal pianissimo high strings and you’re standing on the remote Suffolk coast gazing out to sea. MSO had imported lots of extra players for this ambitious piece (and the Elgar with which the concert ended) so we had double brass, four percussionists and eight double basses – all contributing to the colourful descriptiveness which Brian Wright drew out of the orchestra.

Then we skipped 150 years back to the classical world of Weber and reduced forces to accompany Emma Johnson in the second Clarinet Concerto. Always a charismatic player, she twinkled with delight as she played, turning the concerto into an engaging musical conversation, especially in the first movement. She also gave us a nicely controlled andante and enjoyably sparky syncopation in the third movement. 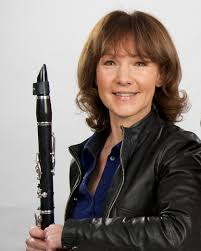 Unusual programming meant she was again the soloist in another concerto after the interval. Malcolm Arnold’s second Clarinet Concerto is not very well known and, although she played it with panache, it’s obvious why we don’t hear it more often. It’s an incongruous mixture of disparate elements including a long improvised cadenza, a soulful central lento and then “The pre-Goodman Rag”. Even Johnson’s fine playing and Brian Wright’s skilful direction failed to endow it with any sense of cohesion.

And so, finally, to Enigma Variations in which all those mood changes and potential pitfalls were adeptly negotiated with the wit of Variation 3 and Variation 11 nicely brought out. It was also a treat to hear Elgar’s imaginative orchestration so clearly stressed: the tuba in Variation 7, the piccolo in Variation 8 and the viola and bassoon solos in Variation 10, for example. And I admired the tempi in Variation 9 (Nimrod). There often is a tendency to play it so slowly that it feels as if it’s dragging. Wright resisted that by keeping it moving which worked well.

In short, another good night for MSO.